Swathes of ribbed concrete and glass form curvaceous walls and a spiralling walkway for this art faculty at a Tenerife university, designed by local studio GPY Arquitectos (+ slideshow).

GPY was asked to create the 32,000-square-metre Faculty of Fine Arts for the University of La Laguna, which is located in the northeast of Spain's largest Canary Island.

The new facility stands on the periphery of the university's campus beside a highway, so the architects wanted to create a protected green space at its heart. 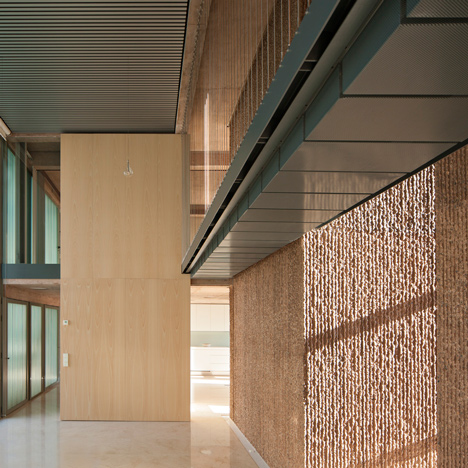 To achieve this, a public plaza extends through the building's entrance to a central courtyard containing a large curving ramp, which was constructed from the same vertically indented concrete as the walls.

In the courtyard, pockets of greenery are set within the building's undulations.

Tall palm trees and leafy shrubs grow out of a gravel-covered bed in one curving lightwell, while the area below the spiralling walkway boasts a lawn.

"Our main challenge was to create a link between the new faculty building and its surroundings by working with the open public spaces and to increase the synergies between the academic complex and its urban context," said GPY.

"The new building presents itself as an extension of the campus' public space, while creating an autonomous interior landscape of its own."

"A skin of suspended concrete slats adopts a curved shape which develops on the different levels, protecting and wrapping the open space of the building," added the studio.

The heavily textured exterior is contrasted by the wood-imprinted concrete lining of the double-height studios and workshops within.

The rooms, which run in a continuous band around the outer walls, are linked by a central corridor, and can be subdivided or joined with partitions.

"From the main entrance, circulation is continuous, following half-open, undulating corridors," said the architects, who believe the building's curving form helps to aid the flow through the building.

"Adding to this flexibility in use are multiple spaces like the patio gardens and open ramps, the covered galleries and the entrance terrace, conceived as open exhibition and teaching areas, and places for social exchange," they added.

"We like to see the new Faculty of Fine Arts as a building that offers ground-breaking, innovative spaces for experimental and creative education of future students of visual arts."

Ridged concrete is more typically associated with the Brutalism movement.

Among its most famous examples are Bertrand Goldberg's Prentice Women's Hospital in Chicago and Paul Rudolph's Yale Art and Architecture Building in New Haven – both using the material as a defining featuring.

But more recently there has been a resurgence in the technique.

In a Spanish residence by Muka Arquitectura corduroy-textured concrete walls are paired with ridged frosted glass, while Parisian collective Plan 01 used ridged concrete for its curvaceous crematorium in Amiens.