The Yale Center for British Art, designed by architect Louis Kahn, has reopened following a refurbishment that "sets a new standard for the stewardship of modern architecture" according to Robert AM Stern (+ slideshow).

The restoration of the 1970s building was carried out in three phases spanning more than a decade and cost $33 million (£22.7 million), including the reconfiguration of galleries to revive Kahn's original designs.

"The public galleries have been renewed and reconfigured to exemplify Kahn's original vision for intimate aesthetic spaces, including the introduction of 'pogo' walls, redesigned according to the architect's drawing from 1974," said the project team.

"More than a decade of research on the history of the design, construction, and renovation of Kahn's seminal building guided the completion of this project," added Yale University, which owns the building.

Located in downtown New Haven, Connecticut, the centre houses the largest collection of British art outside of the United Kingdom, ranging from the 16th century to the present day.

The building was completed in 1977, three years after its architect, Louis Kahn, died of a heart attack. 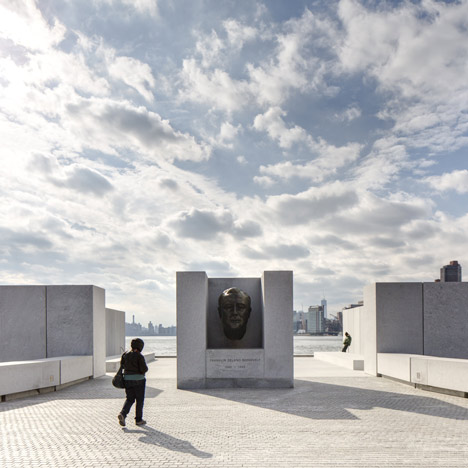 It sits across the street from Yale University Art Gallery, completed in 1953 and also designed by Kahn, who was one of America's most important 20th century architects and taught architecture at Yale during the 1950s.

Rectangular in plan, the four-story centre has a concrete structure and is clad in steel and reflective glass. Interior finishes include travertine marble, white oak and Belgian linen.

Galleries are organised around two interior courtyards, with numerous skylights enabling diffused, natural light to fill many rooms. One of the building's most notable features is a cylindrical, concrete stair tower in the Library Court.

In the 2000s, Yale University set out to gently restore the centre in three stages. The building was closed to the public during the final phase, with a reopening taking place this week, on 11 May.

"The conservation of Louis Kahn's building is a landmark project that sets a new standard for the stewardship of modern architecture," said Robert AM Stern, dean of Yale's architecture school and principal of his eponymous New York firm.

"It is an invaluable teaching resource, frequently studied and used in many classes at the School of Architecture," Stern said. "Much more than a treasure house, the Center is an integral part of the cityscape – a triumph of architecture and urbanism."

The first phase of work, which occurred from 2008 to 2013, included the rehabilitation of an exterior courtyard, called the Lower Court, and repairs to a lobby outside the building's Lecture Hall.

The second phases, completed in 2013, focused on the refurbishment of departments dedicated to prints and drawings, as well as rare books and manuscripts.

The third phase of work began in 2015 and was focused on enhancing galleries and the Lecture Hall. The galleries on the second, third and fourth floors were refurbished to align with Kahn's design.

This included adding "pogo" walls – demountable partitions that are used for displaying art works that can be moved around according to the building's internal grid. These allow curators to reconfigure the spaces within the galleries for different exhibitions.

In the Lecture Hall, the team added new audiovisual, video conferencing and lighting capabilities, and also created seating areas for guests in wheelchairs and their attendants.

Changes to the building include the conversion of an administrative space into a new Collections Seminar Room and the introduction of white oak lockers and gender-neutral bathrooms on the lower level.

In 2011, the center published a detailed conservation plan, described as "the first of its kind to be produced in the United States". The publication chronicles the building's design and construction history and proposes policies for its upkeep.

"It addresses the evolution and appropriate upkeep of a modern building by identifying the key features characterising its cultural significance, and determining those which should be protected and others which can be allowed to change," the university said.

Other prominent buildings at Yale include the Art and Architecture Building by Paul Rudolph, which is one of the earliest known examples of Brutalist architecture in America.

Photography is by Richard Caspole and Michael Marsland