Intended to foster a more collaborative working style, the London studio brings together the studio's 200 staff on one floor of the Leadenhall Building, completed by the Richard Rogers-led firm at the end of 2014.

The layout is left as open as possible, eschewing individual offices in favour of a plan where everyone sits together. This allows plenty of daylight to pass through the space, but also promotes the "democratic philosophy" of the firm.

"We have worked hard to preserve the practice's ethos," said Richard Rogers, who runs the firm with 12 other partners.

"Our new studio embodies the teamwork, flexibility and sustainable working practices that characterise our architecture."

For over 30 years, the architects were based in a riverside building at Thames Wharf, west London, with the River Cafe restaurant founded by Richard Rogers' wife Ruth acting as a de facto staff canteen. But they were forced to move when the lease expired and the freeholder decided to redevelop the site.

The partners saw this as an opportunity to bring together staff who previously had been spread out across five floors.

They chose to take a floor in the Leadenhall, not just because they designed it, but also because they saw it as the best fit for their needs. It puts them in the heart of the City of London, right next to Rogers' career-defining Lloyds building.

"Thirty-six years after winning the competition for Lloyds of London, we are delighted to have moved across the road," said Rogers.

"Offices have changed immeasurably in that time, and this move from Thames Wharf Studios reflects that."

"The riverside location was unique but on a daily basis it was hard to get together as a single studio," added senior partner Ivan Harbour. "Our collaborative spirit was ultimately challenged by our workplace." 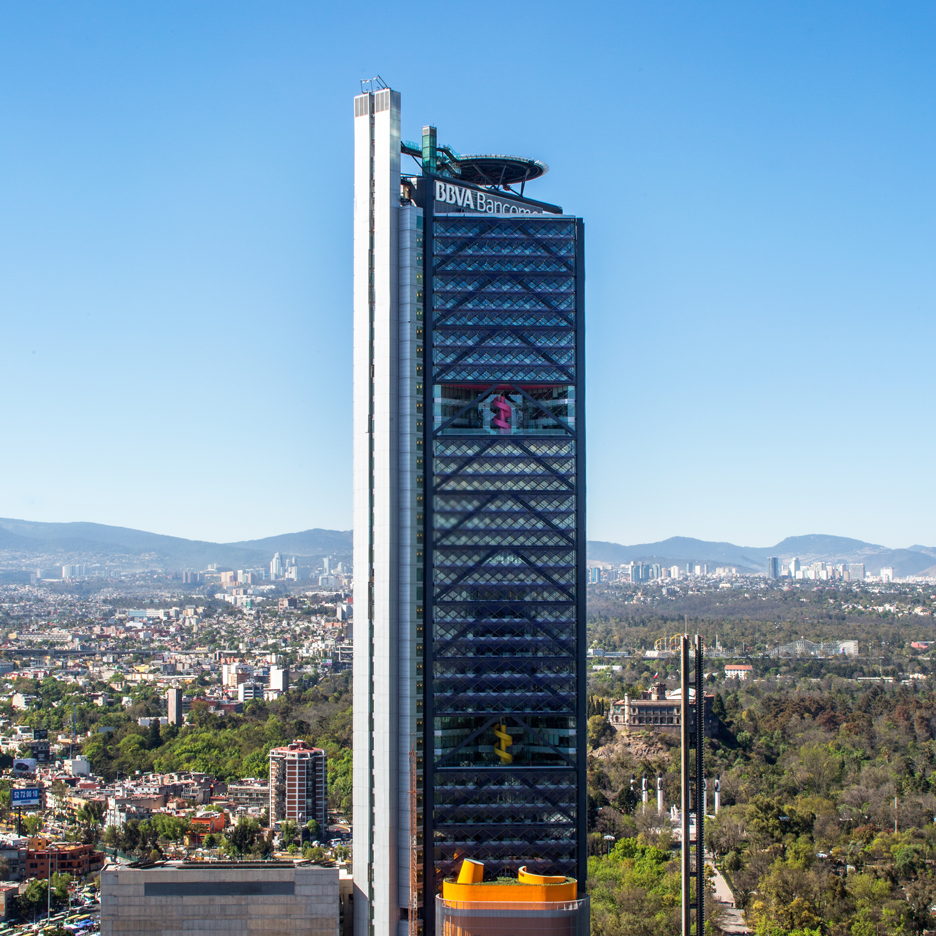 "We are now all in one studio, in the very heart of the City," he continued. "Our clients experience our architecture firsthand and how we use it. Our legacy frames both sides of the street."

The new office takes up all of the building's 14th floor. Desks are arranged in three groups beside the windows on the west, south and east walls, offering staff views of St Paul's Cathedral, Canary Wharf and the Lloyd's building.

Each bank of desks is fronted by a brightly-toned metal cabinet, while HÅG Capisco office chairs are provided in bright blue, red, orange and green.

These workspaces wrap around a central presentation space, which has glazed walls so staff can see what's going on inside. It can host up to 200 people for lectures, but can also be subdivided into several meeting areas.

The entrance is located at the northern end of the building, along with facilities including toilets, a kitchen and a model-making workshop. The pieces made in this workshop, along with archive models, are displayed on a large shelving unit nearby.

There are also quiet areas in the corners of the building surrounded by plants, where staff can take time out from their work.

True to the firm's architecture, which typically leaves services exposed, the ventilation ducts and electrical cables running across the ceiling are left uncovered, revealing the full height of the space.

"My thoughts were very much ones of how the possibilities of office space, which by its very nature tends to be neutral, could become more expressive of the building's architectural intent," said senior partner Graham Stirk.

"This led to our decision to reveal the muscular steelwork, services and all of the components that make a modern office space function, and celebrate them in a clear and legible manner. It has become a well-coordinated New York loft where the backdrop is neutral but offset by fantastic splashes of colour and activity."

A custom lighting system was developed with engineer and Arup and lighting consultants Speirs + Major, consisting of circular LED fittings arranged in a grid that lines up with the building's exposed structure.

These lights change in tone across the day, to suit the level of daylight outside.

Rogers Stirk Harbour + Partners was formerly known as the Richard Rogers Partnership, but changed its name in 2007 to reflect the roles of its other partners. The firm's portfolio includes the Stirling Prize-winning Maggie's Centre in London and the Bodegas Protos winery in Spain.

The firm completed work on the Leadenhall Building in 2014. With a height of 224 metres, the office block is the tallest building in the City of London.

The building is often referred to as the Cheesegrater in reference to its tapered profile, designed to respect views of St Paul's Cathedral.

Photography is by the architects, apart from where otherwise indicated.