Designed by New York and Chicago firm Norman Kelley, the shop is located in the Windy City's Bucktown neighbourhood.

The ground-floor unit of a two-storey building was overhauled by the studio to create a space for Aesop, which insists that each of its outposts has a different design.

This extra weight required extensive structural alterations to the building.

"To carry the load of the bricks, the floor was entirely restructured with new concrete and steel construction filling the crawl space below," studio co-founder Tom Kelley told Dezeen. "In addition, we removed an existing chimney to allow for an open plan and unobstructed view of and from the street."

On the wall, rectangular bricks are arranged in pinwheel formations around square pieces. A contrasting herringbone pattern is used across the floor. 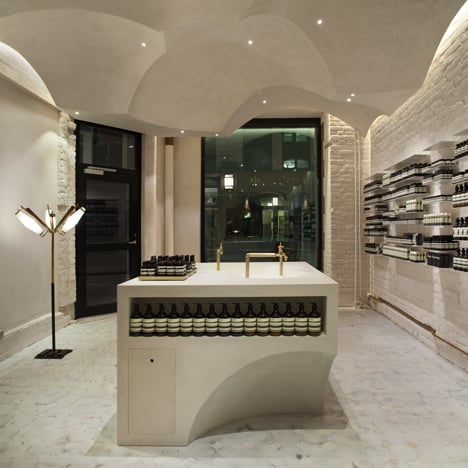 Black alcoves display the brand's skin and hair products. The same colour is used to form the service counter and a central wash basin unit for testing samples.

Aesop and Norman Kelley collaborated closely on the design, which marks the brand's first location in the Midwest region of the US.

"We were encouraged to look near, rather than far, for conceptual, material, and tectonic inspiration," said Kelley.

"We unified our knowledge of Chicago's architectural history, from post-fire [1871] to Postmodernism, with Aesop's dedication to creating considered architectural interiors," he added.

The brand's other shops in the US include an outpost in New York's Chelsea, which is decorated with copies of The Paris Review magazine, and a store in Boston with shelves made from wooden cornices.

It also has spaces in San Francisco, East Hampton and Grand Central Station. Norman Kelley is currently working on an Aesop store in New York's Tribeca district, due to open soon.