Apple has rethought its approach to retail and debuted a series of new interior features at its latest store on San Francisco's Union Square, designed with UK architecture firm Foster + Partners (+ slideshow).

Opening fifteen years after the brand unveiled its first stores, the outlet will serve as a model for future Apple Stores around the world and represents an overhaul of the brand's approach to retail, with greater focus on community and entertainment.

“Fifteen years ago today Apple opened its first two stores and we’re thrilled to mark the occasion with the opening of Apple Union Square in San Francisco,” said Angela Ahrendts, senior vice president of retail and online stores at Apple.

“We are not just evolving our store design, but its purpose and greater role in the community as we educate and entertain visitors and serve our network of local entrepreneurs," added Ahrendts, who was formerly CEO of fashion brand Burberry and was brought to Apple in 2014 to overhaul its retail offering.

Innovations include a public square called The Plaza with free wifi and seating that will be open 24 hours a day, and an educational space called The Forum.

"We have a deep commitment to the cities we work in, and are aware of the importance that architecture plays in the community," said Apple chief design officer Jonathan Ive.

"It all starts with the storefront — taking transparency to a whole new level — where the building blends the inside and the outside, breaking down barriers and making it more egalitarian and accessible," said Ive, referring to the 42-foot (12.8-metre) sliding glass doors to Apple Union Square. These form part of a fully glazed wall facing Post Street. 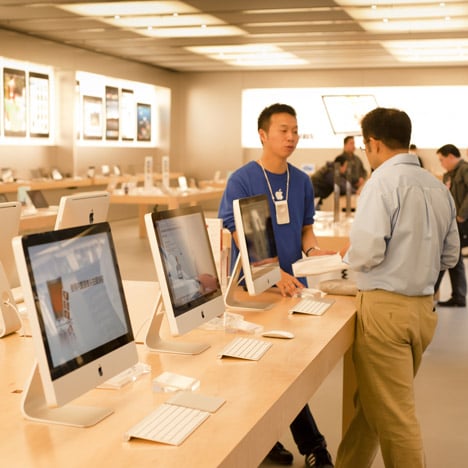 Inside, the building is supported by a giant steel truss structure that bridges over the basement ballroom of the neighbouring Grand Hyatt hotel.

A spine runs down the centre of the space, anchoring a cantilevered mezzanine floor that divides the tall volume. White ceiling panels that illuminate at night are located under the roof and the mezzanine, which tapers from the middle to just one foot (30.5 centimetres) deep at the edges.

Two glass stairways, fixed with metal "pucks" to create the appearance of floating treads, are located at either end of the store and lead to the upper level.

The project also involved the revamp of a public plaza to the rear, accessed by another set of sliding glass doors. The design was revised in 2013 after a backlash against its disregard of the Ruth Asawa fountain – an important heritage feature in San Francisco – which has been given a new setting on the steps leading down to Stockton Street.

The plaza has public seating and Wi-Fi, a 50-foot (15.2-metre) green wall, and will host regular acoustic performances.

The store design was a collaboration between Apple's in-house teams led by Ive and Ahrendts, and Foster + Partners.

"This is an incredible site on Union Square and a chance to create a new public plaza," said Foster + Partners architect Stefan Behling.

"It is possible to experience Apple's extraordinary products and services while taking in the buzzing Union Square on one side and relaxing in the contemplative quiet of the new plaza on the other."

Foster + Partners has overseen the design of several Apple stores worldwide, including branches in Istanbul and Hangzhou.

The firm, led by architect Norman Foster, is also working on the vast Apple Campus 2 in Cupertino.

Apple plans to roll out the plaza concept internationally, along with four other new features visible at the San Francisco store.

These include The Avenue – a display area for accessories along the central spine wall.

A new learning environment called The Forum occupies the centre of the mezzanine, against a large video wall that is visible from Union Square.

Tucked behind the green wall, The Boardroom provides a place for local entrepreneurs and enterprises to meet.

The store is powered by 100 percent renewable energy, including power produced by photovoltaic panels integrated into the roof.

Apple's original San Francisco store opened on Stockton Street in 2004. The tech giant's first two retail outlets were located in McLean, Virginia and Glendale, California, both inaugurated on 19 May 2001.

The shakeup of the brand's retail approach follows criticism from retail designer Tim Kobe, who worked on the first Apple Stores. Speaking to Dezeen in 2013, Kobe said that the evolution of Apple's retail approach was "not happening as fast as it could be."

In 2013, Apple trademarked the "distinctive" interior design of its then 400 stores worldwide. The company was recently honoured with a preservation award for sensitively repurposing historic buildings.

More from Apple and Foster + Partners