Called the Windhover, the building sits at the heart of the university's campus, located in the city of Stanford in northern California. Sitting on the site of a former parking lot and next to an oak grove, it is designed to facilitate meditation through art and nature.

"It is intended for quiet reflection throughout the day for any Stanford student, faculty or staff member, as well as for members of the larger community," said Aidlin Darling Design, a San Francisco-based studio founded by Joshua Aidlin and David Darling in 1997.

Encompassing 4,000 square feet (370 square metres), the rectilinear building features rammed earth walls that were made of soil excavated from the site. The heaviness of the earthen walls is contrasted with large expanses of glass and screens made of thin cedar strips.

Visitors enter the pavilion by passing through a long garden lined by tall bamboo plants.

"[The progression] allows members of the Stanford community to shed the outside world before entering the sanctuary," said the architect. 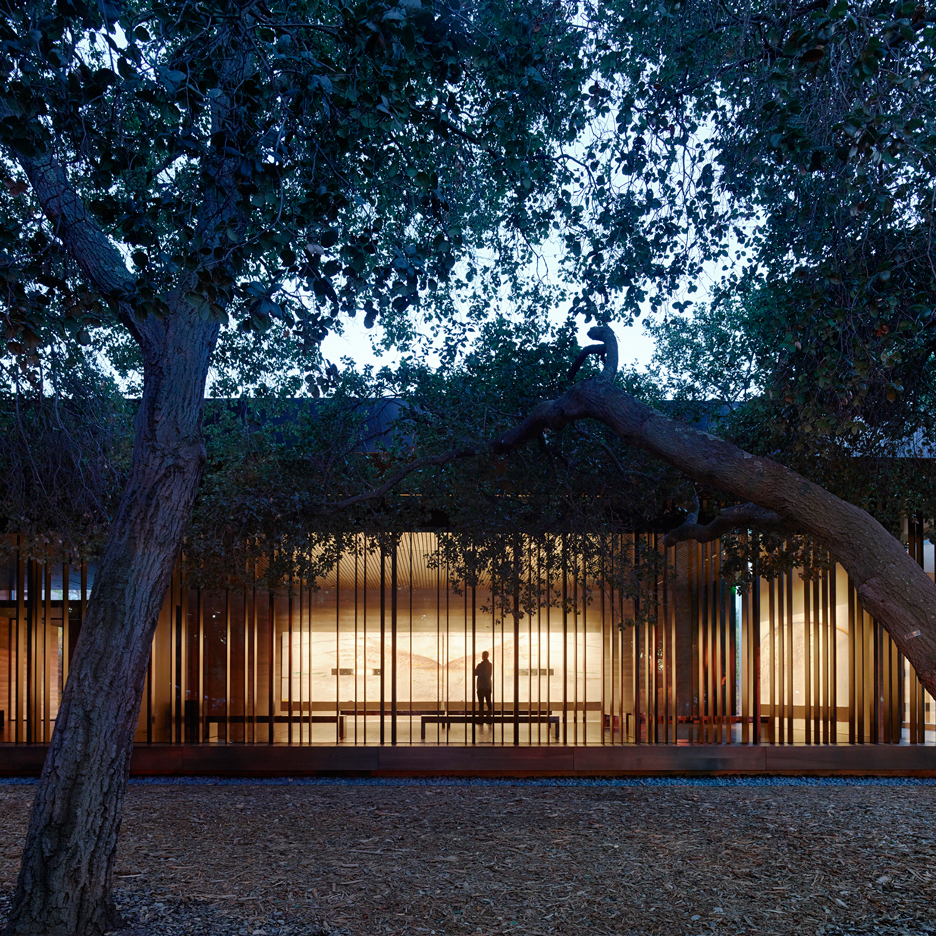 Inside, the building features a series of galleries, flanked on one end by a reflecting pool. Interior finishes include dark-stained oak flooring and slatted wooden ceilings.

Near the centre of the building is an outdoor courtyard bordered on one side by a glass-enclosed walkway. The courtyard contains a bubbling, cube-shaped fountain that is meant to help enhance the centre's serene ambiance.

"Water, in conjunction with landscape, is used throughout as an aid for contemplation," said the firm. "Fountains within the main gallery and the courtyard provide ambient sound, while a still pool to the south reflects the surrounding trees."

Within the galleries, skylights with motorised louvres enable natural light to wash over five large paintings by the late American artist Nathan Oliveira, who taught at Stanford for more than three decades.

The paintings – each 15 to 30 feet in length (4.5 to 9 metres) – are from his Windhover series, which was inspired by kestrels flying above the Stanford foothills. The series was named after a poem written by the British poet Gerard Manley Hopkins in 1877.

"The centre is conceived of as a unification of art, landscape and architecture to both replenish and invigorate the spirit," the firm said.

The paintings, which were a guiding force during the design process, are visible from outside the facility.

"From the oak grove to the east, visitors can view the paintings glowing within the centre without accessing the building," the firm said.

While Oliveira's paintings are illuminated, other areas of the centre were kept intentionally dark in order to direct visitors' attention to the artwork and the landscape. Throughout the centre, visitors are afforded views of the outdoors.

The project was a winner of a 2016 Honor Award, given by the American Institute of Architects. Other winners included a Dallas art museum by Thom Mayne and Jeanne Gang's Chicago boathouse.

Photography is by Matthew Millman