Google has used its Jacquard technology to weave conductive threads into a Levi's jacket, turning its sleeves into touch-sensitive panels that can be used to control electronic devices (+ movie).

Set for release in spring 2017, the Levi's Commuter x Jacquard by Google jacket is the first garment to integrate the company's woven technology.

It is designed for urban cyclists, as part of Levi's Commuter range that includes garments made from water- and odour-resistant fabric.

Cyclists can use the Jacquard technology to access navigation prompts and information on nearby places, change their music, and answer calls just by touching the jacket's sleeve.

"The jacket allows cyclists to control their mobile experience and connect to a variety of services, such as music or maps, directly from the jacket," said the American clothing brand.

The interactive garment is created with conductive threads, which are woven into the denim textile and arranged to form textured panels on the sleeves.

Touching these patches sends signals wirelessly to a smartphone or tablet, via a detachable smart tag that clips to the cuff. This translates the hand movements into controls, so the sleeves respond similarly to a smartphone screen. 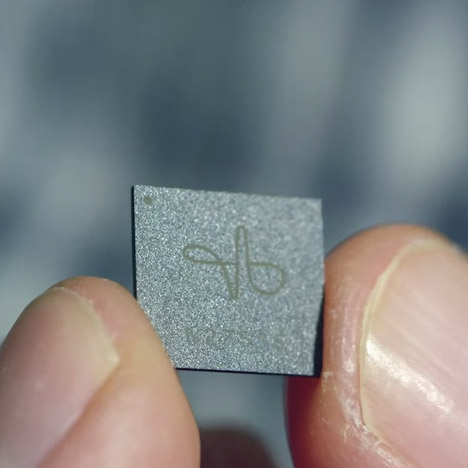 A variety of simple gestures can be programmed to activate different commands, which the user can customise with an app.

The smart tag is rechargeable and comes in a variety of colours and styles. Once it is removed, the jacket is entirely washable and the fabric acts like traditional denim, according to Levi's.

Now known as Jacquard by Google, Project Jacquard was first revealed at Google's I/O development conference in May 2015.

It was devised by Google's Advanced Technology and Progress (ATAP) department, which is also working on sensors that use radar to translate hand movements into controls for electronic devices, and previously developed Project Ara until the modular smartphone was given its own division.

Jacquard forms part of a recent revival in textiles. Nike has opened a textile design studio to develop new fabrics for its shoes and apparel, while MIT has developed a 3D-printed fur.

On the back of this surge in interest, Li Edelkoort has announced plans for a month-long celebration of textiles in New York this September.