Sportswear brand Nike has opened a textile design studio in east London to develop new fabrics for its shoes and apparel.

The studio, which opened last year in Hackney but has not been publicised, acts as a laboratory to explore new ways of using textiles in sportswear.

John Hoke, Nike's vice president of global design, told Dezeen that the new studio was a response to the increasing importance of advanced textiles to its sneakers.

"Lately we've been hiring people with engineering and textile degrees, because this is now really a textile problem," he said. "Old shoes were just flat sheets that you stamped and moulded. But this is not," he said, referring to Nike's Flyknit weaving technology. 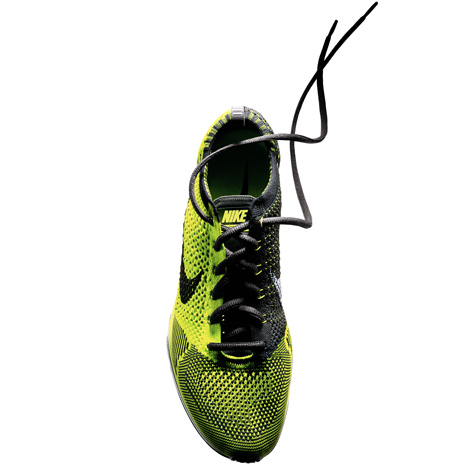 Unveiled in 2012, Flyknit combines yarns with different properties in varying densities, meaning a single piece of fabric can be stretchy in one area, stiff in another and so on.

Flyknit, which is now a billion-dollar product range for Nike, was invented almost accidentally when Hoke's team bought an off-the-peg knitting machine and started playing around with it.

"It's funny, we just hacked into a sweater machine," Hoke told Dezeen at the Nike Innovation Summit in New York last month. "We bought a sweater machine and thought, what it we hacked it and didn't make a sweater? And put different threads in? And elastics? How would that feel?"

"We've hired a bunch of designers using digital tools, hacking these machines and giving us these samples," Hoke said, saying the presence of leading textile courses in the English capital was a key reason for the move.

"We're looking at waft and depth and materiality and they're just trying stuff. Through that trying we get a lot of great things."

Hoke heads a team of over 700 designers, most of which are located at Nike's campus near Portland, Oregon. The brand also has designers in New York, Tokyo and South America.

"The London [studio] is relatively new," Hoke said. "It's just because there's a great expertise there. We found that we had a lot of young kids on the island of Britain who just love this. So we said let's be creative and open up a studio that lets these designers stay in their home country and explore and experiment."

He added: "Every month we get these big boxes and it's like Christmas! Our guys are like, wow! It's a great source of energy for me and my leadership team. Part of the magic of innovation design at Nike is the ability to wonder, to design without a brief. To sit around and think about ideas that you find interesting, and refine and edit."

Last month's Nike Innovation Summit was held to present new products that athletes will wear at summer sporting events including the Rio 2016 Olympic Games and the UEFA Euro 2016 football tournament, plus other innovations including the Nike HyperAdapt 1.0 sneakers that have self-tightening laces.

At the summit, Nike footwear designer Tinker Hatfield told Dezeen the sneakers were "totally not a gimmick", and could help athletes perform better, and assist people with mobility issues who struggle to tie and untie their shoelaces.