A pair of box-like units contain the bedroom and bathroom in this apartment just outside of Tokyo, which was renovated by architects Tomoko Sasaki and Kei Sato to create an open space for their own family (+ slideshow).

Sasaki and Sato – founders of Japanese studio 8 Tenhachi – wanted to make the most of their small 67-square-metre apartment located in Japan's Kanagawa prefecture.

The studio refurbished the apartment by stripping back the interiors, exposing the concrete beams across the ceiling and removing all of the partition walls.

This created one flexible space for cooking, eating, working and relaxing. The duo then inserted two structures, which look like boxes with open fronts, to house more private areas for sleeping and washing.

"We think that there are both public behaviours and private behaviours in a house," said 8 Tenhachi. "These two boxes play the role of a gentle connector."

"None of the walls reach the ceiling, which allows us to see that the new infill pieces are different from the structure of the original concrete."

The two units are located near the apartment entrance, while the main living area is towards the back so it receives the most natural light from the large windows. 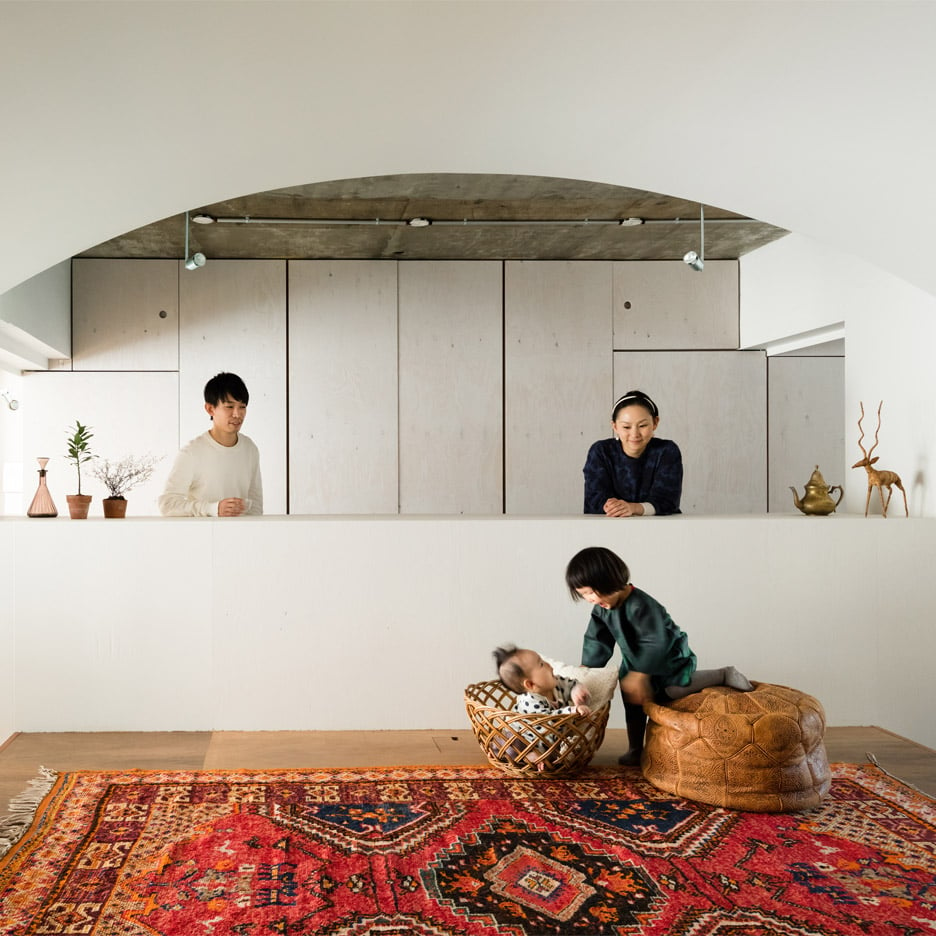 To compliment the exposed concrete, the designers kept the interior simple, painting the walls matt white and covering the floors in oak boards angled at 45 degrees.

They added a white-painted structure to the corner of the apartment to contain the master bed. The floor inside is set 50 millimetres lower to further differentiate it from the rest of the space, and its ceiling comprises exposed wooden beams.

A ladder leads onto the top of the box, which was designed as a small play space and sleeping area for the children. Storage is fitted into the wall and is accessible from both sides.

The second, slightly taller unit, has three walls and a roof that contains the bath and shower. It is clad in angled wooden planks, matching the floor.

There is a small step up to the bath, which is framed by an opening in the front of the box. A curtain can be drawn across when the bathroom is in use.

"Viewed from the living room, the interior of this box appears as a three-dimensional frame," said the studio. "The bathtub and rain shower are at centre stage, brightened by the backing of white hexagonal tiles."

A toilet is also located in this unit, but housed it a separate compartment that can only be accessed from the main space.

At the centre of the living room is a long table made of Japanese cedar, which was designed as a multi-functional piece of furniture. It acts as a kitchen surface, dining area, workspace, and a place for the children to draw.

"The table is not divided by functions, but instead gently connects them," said the studio. "Daily family situations take place here, and when people gather for parties, this transforms into a 20-seat common table."

Shelves hanging above the table store the kitchen utilities and books can be stored underneath. A swing is attached to the ceiling with metal hooks.

The apartment has a small entrance hall, which features a bike rack and leads to the main space via a corridor between the two units.

This is the latest in a series of apartments in and around Tokyo that have been stripped back and reconfigured to make the most of small floor areas.

FrontOfficeTokyo replaced the walls in a Tokya apartment with multi-functional box units while MAMM Design added curved walls and different-shaped doorways to an apartment in Sagamiono.

Photography is by Akihide Mishima.