Architects Paul de Ruiter and Chris Collaris have transformed a former private museum in Rotterdam into an energy-neutral townhouse, featuring outdoor spaces on each level of its remodelled rear facade ( + slideshow).

The building is located on one of the oldest streets in the Dutch city's Kralingen neighbourhood, which was previously a separate village where Rotterdam's high society built grand villas. It was constructed in 1905 and later used to exhibit its owner's private art collection.

The collection was presented in 20 rooms of the building, which was known as the Kralings Museum. After the owner died, the villa was left empty until its current occupants purchased it with the aim of turning it back into a house.

De Ruiter, whose previous projects include a futuristic eco-house featuring a glass box raised above the landscape, collaborated with Collaris to repurpose the building.

Their aim was to create a sustainable home suited to 21st-century living, while retaining the historic facade and overall character of the structure.

From the street, the building appears much as it would have when first erected. However, at the rear, large glazed surfaces and Minimalist details contribute to a more contemporary aesthetic. 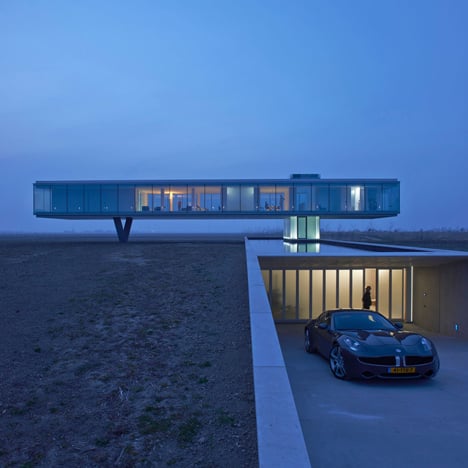 "We tried to make it a very pleasant liveable house using the quality of the existing spaces but we also wanted the spaces to be very light, which wasn't the case in the existing situation," Collaris told Dezeen. "That is why we made a completely new garden facade with big window frames."

The new rear facade was developed in response to the client's request for increased space. A large volume added to the ground floor enabled the construction of a stepped composition, incorporating balconies on the first and second floors.

Full-height windows on each storey overlook the garden and a large patio on the ground floor. The size of the windows contributes to the bright interior and reduces energy consumption from artificial lighting, which was a key aspect of the brief.

Despite the extensive work required to modernise the building's interior, the architects sought to retain the feeling of the original spaces, with their high ceilings and generous proportions.

"We tried to keep as much as possible the spatial quality from the existing parts, and the new additions were made to improve that quality," Collaris added. "But the new additions also set a new quality standard in finishings and the overall feeling of the house."

The ground floor contains a kitchen flanked by living areas on either side, including a window seat and breakfast table set up in the bay window looking onto the street.

A largely open space to the rear of this floor contains a dining table and lounge, separated by a wall incorporating a built-in fireplace. Both of these areas look onto the garden through tall windows and glass doors.

In a light-filled atrium at the centre of the house, a staircase designed as a freestanding sculptural element ascends from the basement to the upper floors. Bedrooms and bathrooms are situated on the first floor, with a guest room, office, lounge and wellness area on the second floor.

The staircase's bamboo treads match the flooring used throughout the rest of the house, while rough-sawn oak adds a natural tactility to the stringer surfaces.

Several sustainable technologies are implemented throughout the house, including photovoltaic panels on the roof to gather solar energy. A heat pump and two fireplaces contribute to the heating requirements, which are regulated to ensure energy is only used when needed.