Canadian studio MU Architecture has completed a white-painted holiday home in rural Quebec that is composed of two stacked volumes that cling to the steep terrain (+ slideshow).

Called the Nook Residence, the weekend retreat is situated in the Eastern Townships region of Quebec, in a quiet area near Lake Memphremagog.

Encompassing 3,000 square feet (278 square metres), the two-storey house is clad in white-painted pine, which merges the building with the snowy landscape in winter.

"Its whiteness blends into the landscape as a tribute to the great Quebec winters," said MU Architecture, a Montreal-based firm.

Creating a home that "sits in continuity" with its sloped site and surrounding landscape was a key factor the design process.

"The house clings to the steep terrain and seems to be projecting toward the lake," the architect described.

Conceived as a white mass with a large gap, the dwelling is composed of two irregularly shaped, stacked volumes, with the upper level cantilevering over the lower floor. 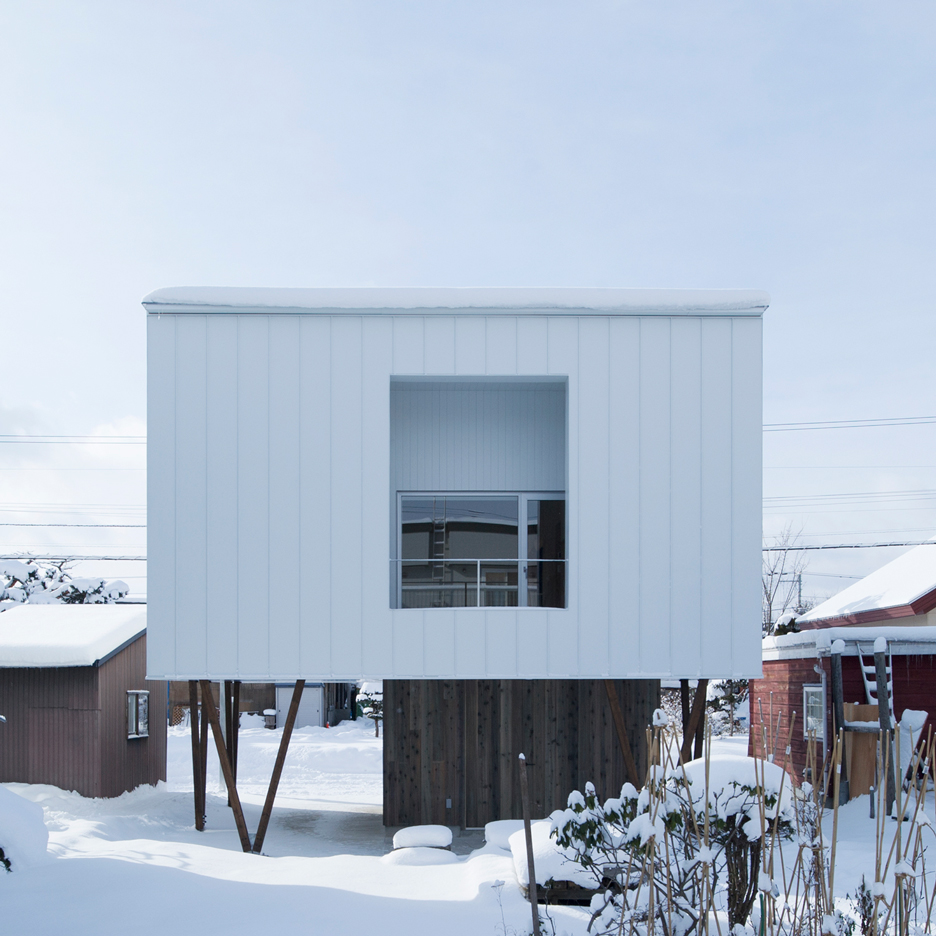 On the upper level, the architect carved out a large opening that serves as a carport.

The dwelling features strategically placed openings that enable views while also creating a sense of mystery.

"Turning its back to the street, it offers a virtually blind facade that encourages discovery and piques curiosity," the studio explained.

Roof eaves, which are sheathed in cedar, protect a large, south-facing terrace and provide shade in warmer months.

Inside, the home features a sequence of open living spaces on the upper level, each of which offers views of the lake in the distance.

On the east side, a sunken area with a sofa serves as an "interior balcony" meant for relaxation and contemplation.

"Acting as lounge suspended over the void, this interior balcony between two levels accentuates our appreciation of the site in all its splendour," the firm said.

A wooden staircase leads to the lower level, which contains two bedrooms, a bathroom and a dormitory-style sleeping area with bunk beds.

Throughout the home, the architect used a restrained material palette to create a bright and warm ambiance.

"Polished concrete radiant floors, black ceramic tiles and walnut furniture punctuate the space with elegance," the firm stated, adding that most of the walls are made of board-formed concrete.

To provide a connection between the interior and exterior, MU Architecture covered the ceilings in the same cedar used on the roof soffits.

Other homes in Quebec include a woodland vacation cottage by Cargo Architecture, which has a swing and wood store built into its facade, and a cube-shaped home by Architecturama that has a turquoise staircase running diagonally across its exterior.