The architects, led by OMA's Ippolito Pestellini Laparelli, have handed over the 9,000-square-metre building to new tenants DFS of Hong Kong for retail fit out.

OMA was commissioned by the Benetton family in 2009 to transform the structure, which has had many lives since it was first built in 1228.

Located beside the iconic Rialto Bridge, the Fondaco dei Tedeschi has served as a trading post for German mer­chants, a customs house under Napoleon, and a post office under Mussolini.

The building was destroyed twice by fires, and rebuilt in its current form in 1506 – although it has undergone many alterations since. Most recently, it was entirely reconstructed with modern concrete technology during the 1930s.

"The Fondaco is a historical palimpsest of modern substance, its preservation span­ning five centuries of construction techniques," said OMA.

It was granted legal monument status in 1987, which meant that OMA's interventions had to be minimal. 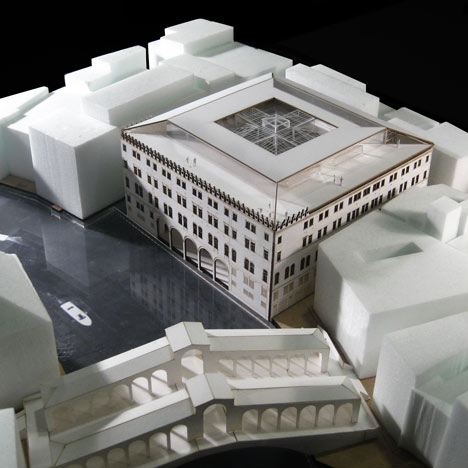 The 19th-century pavilion that sits above the courtyard and encloses it was restored with a new steel and glass floor, creating a space for hosting events.

A large wooden terrace was also added to the rooftop, providing views over the city. These spaces and the courtyard below will be open to the public at all times.

Additional entrances to the building were created from Campo San Bartolomeo and the Rialto, while existing access into the courtyard – used by locals as a shortcut – was retained.

The vertical circulation up the building was aided by the installation of escalators, which feature wood-panelled side and bright red steps.

"OMA's renovation scheme is based on a finite number of strategic interventions and vertical distribution devices that support the new program and define a sequence of public spaces and paths," said the studio.

Glimpses of terracotta-coloured partitions with geometric cutouts can be spied behind the internal colonnades.

Other interior spaces are clad with golden metal and mirrors, similar to the materials used by the firm for the Fondazione Prada cultural centre in Milan.

The layout is planned to stay true to the original sequences of rooms, and historical elements have remained untouched.

"The Fondaco dei Tedeschi will unlock its potential as a major destination and vantage point for tourists and Venetians alike," said OMA, "a contemporary urban department store staging a diverse range of activities, from shopping to cultural events, social gatherings and everyday life."

OMA first unveiled its design in 2010, and planning permission for the scheme was finally granted in 2013.