Movie: in this exclusive video interview, Bjarke Ingels explains how his firm BIG used stacks of fibreglass boxes to create a huge undulating structure on the lawn in front of the Serpentine Gallery in London.

BIG's Serpentine Gallery Pavilion 2016 is made up of thousands of translucent fibreglass blocks, which are stacked on top of each other to form a wall that appears to have been pulled apart.

"We've taken maybe the simplest element in architecture – the wall – and unzipped it to form a hall inside," Ingels says in the movie, which Dezeen filmed at the unveiling of the pavilion this morning.

"What we've tried to do is create a sort of mountainous landscape on the outside and a cavernous canyon on the inside."

Ingels likens creating a void from a single wall to the approach BIG took to designing the recently completed VIA project in New York, a 142-metre-high residential building with a courtyard at its base that the Danish architect describes as a "courtscraper". 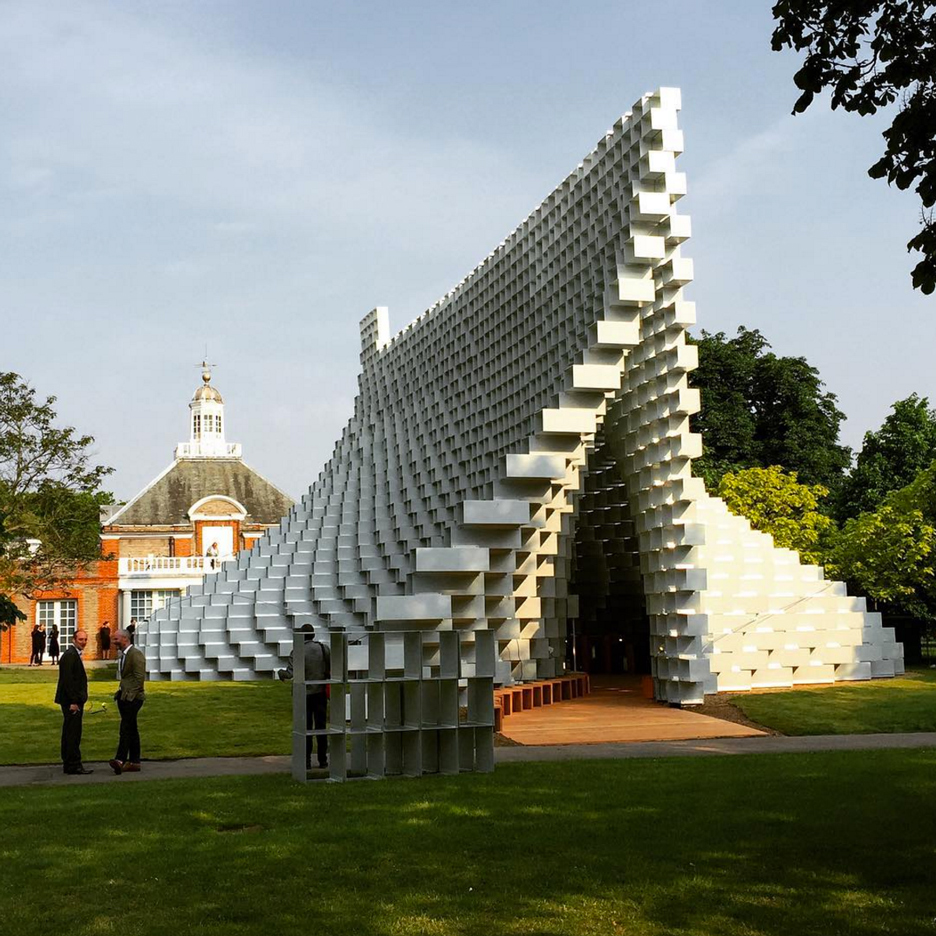 "Quite often in our work, the trigger for the idea comes from combining two seemingly mutually incompatible elements into a new hybrid," he explains.

The pavilion, which is located outside the Serpentine Gallery in London's Kensington Gardens, appears rectangular when viewed side-on. Its curving silhouette is revealed from other angles.

BIG created the form by gradually shifting the hollow fibreglass blocks forwards and backwards to create two undulating surfaces, which divide to form the central space and curved entrances at both ends.

"From the outside you can climb it and sit on it," Ingels says. "It also creates a gate to the Serpentine Gallery and creates this beautiful framed view."

The pavilion also changes from opaque to see-through, depending on the viewing angle.

He adds: "So it's both opaque and transparent, orthogonal and organic. It's trying to combine all of these elements."

The Serpentine Gallery Pavilion 2016 opens to the public on 10 June and will stay open throughout the summer until 9 October 2016.

Like previous pavilions, the structure will be sold and rebuilt in another location after it's been taken down in London.

"The pavilion has a temporary footprint here in the park," Ingels says.

"You can disassemble all the elements unscathed. And because it's ultra light, you can ship it very easily. That maybe gives it a more nomadic character."

BIG's pavilion marks the 16th edition of the annual Serpentine Gallery programme, which offers architects the chance to create their first built structure in the UK.

Dezeen recently looked back at each of the Serpentine Gallery's pavilions from 2000 to 2015 in a series of interviews with gallery director Julia Peyton-Jones.

This movie was filmed by Dezeen in London. All photographs used in this story are by Jim Stephenson, unless otherwise stated.