Fashion designer Aitor Throup has presented a set of prototype garments on giant marionettes instead of models during this season's London Collections: Men (+ slideshow).

Throup's New Object Research project made its catwalk debut yesterday at the Holy Trinity Church, also known as One Marylebone.

The collection was created after a year and a half of work that built on the Argentina-born, London-based designer's initial set of four outfits titled New Object Research, which debuted in January 2013.

At the entrance to the church, four casts of Throup's body wearing these garments were laid on top of each other in a pile.

The installation was named The Resting of the Past, and was created as a memorial to the previous designs.

"This piece represents the acceptance of the now," said Throup. "Through defacing my own work by covering it in ghost-like white paint, I am disregarding its current surface value whilst allowing it to peacefully rest."

To present the latest garments, Throup worked with puppet designer and engineer James Perowne on a performance piece titled The Rite of Spring/Summer/Autumn/Winter. 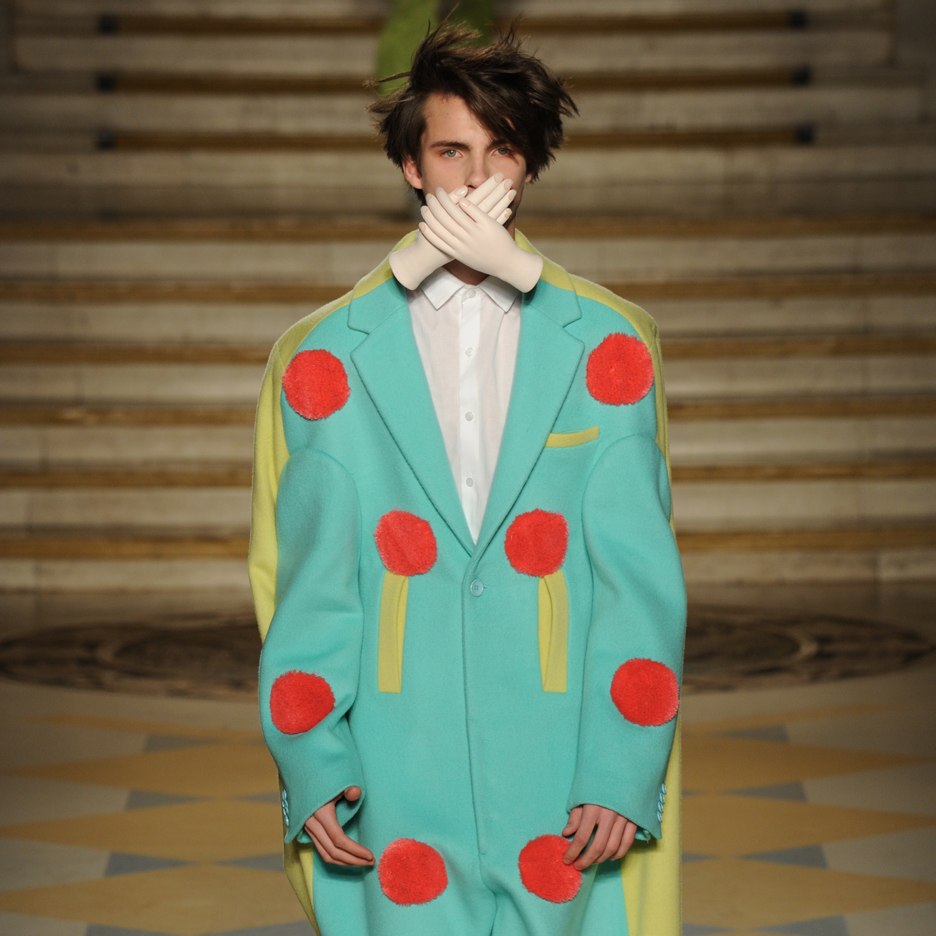 The show was split into three scenes. In the first, a white box placed in the centre of the catwalk was hoisted to the ceiling to reveal a pile of fabric and sticks underneath.

Masked figures dressed all in white began to agitate the poles, causing the material to slowly rise into a human figure dressed in one of Throup's black outfits. The puppeteers then manipulated the pseudo body so it appeared to walk down the catwalk.

When it reached the end, a young girl ran on and removed its dark mask, revealing a white face underneath.

Subsequent looks, all in black and white, were walked down the catwalk on puppets in a similar way – with the masters pushing sticks from behind to emulate the movements of a real model.

One of the moveable mannequins was illuminated from within so its hands, feet and head glowed when the stage lights were turned off.

The final two puppets were "shot" while on the catwalk so coloured powder exploded from their heads.

After the runway presentation concluded, curtains were drawn back to reveal the puppets and outfits hung from the ceiling in front of the church's stained glass windows.

Throup's collection of prototypes, described by the designer as trans-seasonal, will be displayed and available for limited-edition purchase on request from London's Dover Street Market, which recently reopened in a new location.

A fully commercially distributed collection is in development for release in January 2017.

The Spring Summer 2017 edition of the London Collections: Men event runs from 10 to 13 June 2016. In previous seasons, Mackintosh presented its Autumn Winter 2016 range on a set of white podiums and other shows were hosted at a space illuminated by light-filled perforated boxes.

In another similarly unusual fashion presentation, an Alpine choir pivoted on hydraulic platforms as part of Moncler's Autumn Winter 2014 show.