Paris architecture office Dorell Ghotmeh Tane has created a new home for the Estonian National Museum – a 355-metre-long sloping glass building that rises from the runway of a former Soviet airbase near the city of Tartu (+ slideshow).

Dorell Ghotmeh Tane (DGT) won an international competition to design the museum with its proposal for a site on the airfield, which is located four kilometres northeast of the city.

Scheduled to open in October 2016, the glass and concrete building will host exhibitions, performances and education activities. Facilities inside include gallery spaces, a conference hall, public library, auditoriums, educations rooms, offices and storage space for the museum's collections.

"The star draws on an abstraction of the cornflower, the national Estonian flower, and reflects on Estonian folk heritage," architect Lina Ghotmeh told Dezeen. "In the winter snow, the building invites the surrounding landscape within its skin, hence sensitively decomposing its own monumentality."

The land the museum occupies once belonged to Raadi Manor, which was owned by a family of Baltic German aristocrats and later became home to the original Estonian National Museum. 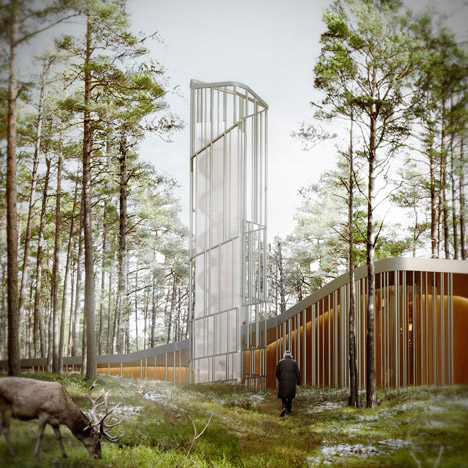 In 1940, 100 hectares of the manor's land were requisitioned to create an airport that was an important base for Soviet bombers for 50 years. The manor was destroyed in a bombardment during the second world war.

DGT's design seeks to reestablish the site as a place for culture and enjoyment at the heart of the local community, whilst recognising and referencing its troubled and sometimes painful history.

"The building is formed by the extension of the airfield's concrete floor, which becomes the roof of the building," explained Dan Dorell. "The [roof's] slight slope embodies the projection of a nation that is taking off from a troubled past into a new future."

The tallest elevation, which reaches a height of 14 metres, folds inwards to form a cavernous sheltered courtyard that directs visitors towards the entrance.

From the entrance, the building extends 355 metres and gradually decreases in height until it reaches the exit at the far end, where the height is just three metres. Several solid volumes containing the various programmatic elements are distributed along its length.

Each of the angled facades is predominantly clad in triple glazing, offering views of the ruins dotted around the site.

"Wide openings allow indirect natural light on the north facade where exhibitions and public spaces are located," Dorell added. "In the south part of the building, all offices, libraries and education classes take advantage of the sun irradiation."

Part of the building spans a section of the Raadi lake, which is visible through the glazed facades and provides a site for activities including ice skating in winter and boating in the summer.

"We changed the landscape," added Tsuyoshi Tane. "We joined two lakes into one where the building becomes a bridge to fly across 40-metre spans. There was nothing on this site, but after 10 years, it is impressive to see that the massive airfield transforms to become a place for people."

Photography is by Takuji Shimmura.