Tiered seating and a children's playground both feature on the roof of a new cruise terminal building in the Estonian capital, designed by local studios Salto Architects and Stuudio Tallinn.

Designed to double as a public space, Tallinn Cruise Terminal has an 850-metre-long promenade across its roof.

Salto Architects and Stuudio Tallinn collaborated on the design. The aim was to create a space that could be active throughout the year, not just during the cruise season.

Large sets of steps are integrated into the roof's surface, creating spaces for people to sit and enjoy the sea view.

These seating areas mean the space can potentially also host events or performances.

"The cruise terminal will be used seasonally, however, to increase the efficiency of the building, it is designed to include the possibility of year-round use," said the studio.

"Eight months a year, the waiting areas can be transformed to host exhibitions, fairs or concerts."

The paved promenade is lined with plants, while a blue rubber area offers space for play and exercise.

There's also a restaurant, slotted into the space underneath the main seating steps.

The cruise terminal is located on the northwest seawall in Tallinn's Old City Harbour. Built from concrete, its facades are a mixture of glass and Kebony wood cladding.

The interior has a simple layout, with a spacious waiting hall at the front and ancillary spaces such toilets and private offices lined up along the back. 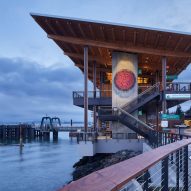 The waiting hall can be sectioned into two different areas – depending on border control requirements – thanks to sliding walls and mobile passport control booths.

A generous staircase leads up to a mezzanine, connecting the interior with the roof level.

The rooftop landscape extends out to the end of the peninsula, beyond the volume of the building. The space underneath provides a sheltered waiting area for cruise passengers.

"The space under the elevated promenade forms an open-air terminal for the third cruise dock to be designed in the future and as well as an umbrella for the tourists walking around the terminal," said the architects.

Salto Architects is one of Estonia's leading architecture studios. Led by architects Ralf Lõoke and Maarja Kask, its past projects include a theatre madre from straw bales and the curvy EMÜ Sports Hall.

The pair won a competition to design the terminal in 2014. Three years later, the city hosted a contest calling for a masterplan to overhaul the entire harbour area.

The winning design in that contest, by Zaha Hadid Architects, incorporated the cruise terminal design along with plans for new housing and office developments. The ambition was to deliver the masterplan by 2030.

The photography is by Tonu Tunnel.