Performers from experimental dance company Bandaloop leap, flip and spin across the glass facade of a 17-storey tower at Boston's Fan Pier in this choreographed acrobatic act (+ movie).

The aerial performance took place to celebrate the opening of 100 Northern Avenue – a 534,000-square-foot office building (49,600 square metres) on the city's waterfront.

Suspended on thin cables and dressed in green, blue and yellow outfits, the dancers ran and jumped across the giant expanse of glass.

During the routine, they ducked under and leapt over one another – clearing impressive air from the vertical surface – as well as displaying synchronised moves.

The cables were anchored on the roof, with the acrobats attached using carabiners and harnesses. The setup allowed them to shimmy up and down the facade, as well as push far off from the vertical surface while remaining secure. 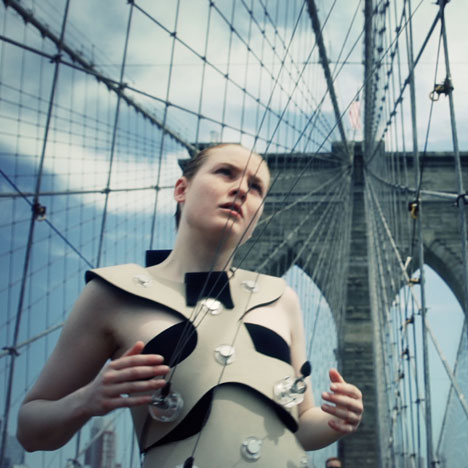 Some parts were performed in pairs, while other sections of the routine involved six or more individuals.

"Bandaloop seamlessly weaves dynamic physicality, dynamic choreography and the art of climbing to turn the dance floor on its side," said the group, which was founded by choreographer and artistic director Amelia Rudolph, and comprises a team of directors, dancers and riggers.

The troupe presents its spectacles internationally, both inside theatres and museums, and outdoors on skyscrapers, bridges, billboards, historical sites and cliffs.

100 Northern Avenue was developed by local firm The Fallon Company, and will provide a headquarters for law firm Goodwin Procter. It is the fifth building to be completed as part of the mixed-use Fan Pier neighbourhood.

In another performance involving a large structure, an artist used an electronic instrument to make music from the vibrations of suspension bridge cables.

On a smaller scale, a group of robot vacuum cleaners were programmed to dance a Viennese Waltz at the Biennale Interieur 2014 event in Belgium.