Architecture studio OMA has completed its extension to the Musée National des Beaux-Arts du Quebec, which features a stack of stepped galleries and a protruding, angular staircase (+ slideshow).

The Pierre Lassonde Pavilion – named after the chair of the museum's board of directors – is due to open tomorrow in Quebec's Parc des Champs-de-Bataille.

OMA's New York office worked with local firm Provencher Roy on the 14,900-square-metre building, which is its first project in Canada and described as the largest cultural project in Quebec City.

The new structure is designed as a gateway between the park and the busy Grande Allée thoroughfare, and a link to the museum's three existing buildings from the main road.

"The building aims to weave together the city, the park and the museum as an extension of all three simultaneously," said the OMA team, which is led by partner Shohei Shigematsu.

Galleries are housed in three main volumes that step down in section towards the park, becoming wider in plan each time. The building increases the museum's exhibition space by 90 per cent.

As part of the stacked arrangement, the top volume cantilevers 20 metres out towards the street. This creates a 12.6-metre-high Grand Hall underneath, which serves as a urban plaza for the museum's public functions and provides access to the galleries, courtyard and auditorium.

The projecting structure is supported by a steel truss system, which allows for a column-free layout inside.

While the Grand Hall is surrounded by clear glass on three sides, the volumes above have facades designed to withstand Quebec's harsh winters.

Walls comprise three layers of glass. One features a patterned frit that mimics the truss structure, another is made from 3D embossed glass, and the third is translucent. 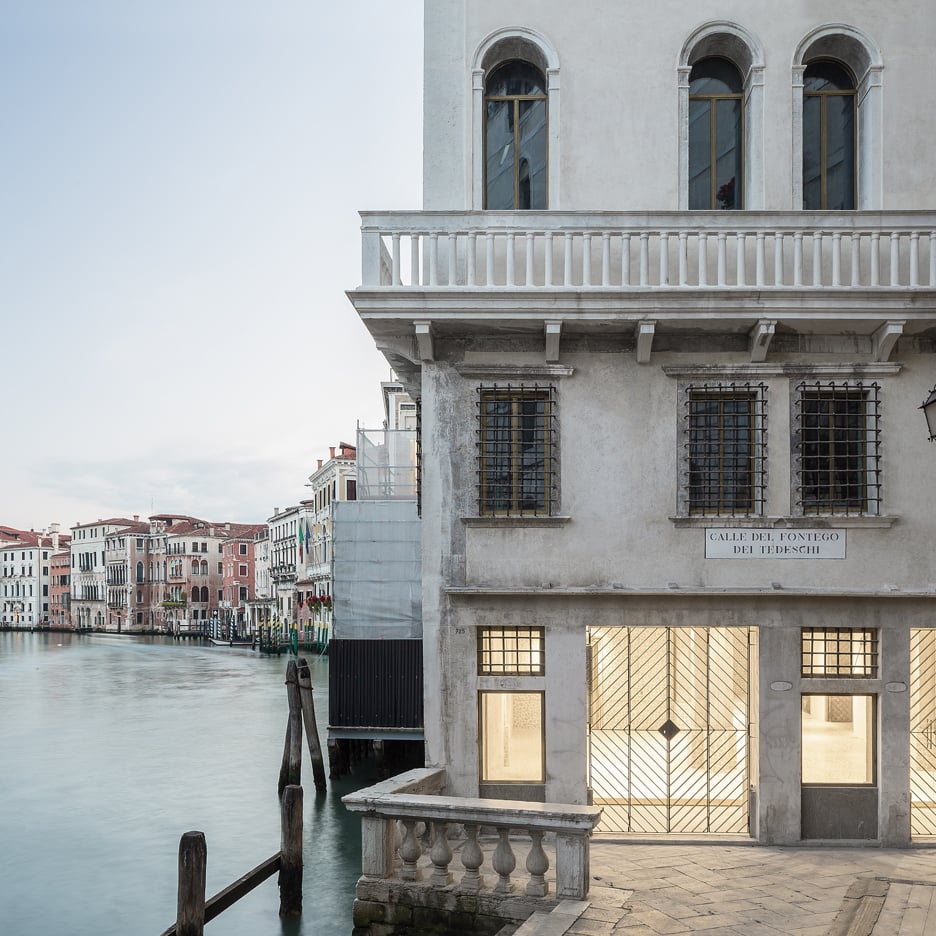 "The contrast between the translucent gallery boxes and clear grand hall reinforces the reading of the building's stacking and cantilevering massing," OMA said.

In the galleries, insulated walls are located behind the glass system. The gaps between the layers house lights that turn the building into a "lantern in the park" at night.

A sequence of spaces like foyers, lounges, shops, bridges and gardens form a route around the edges of the galleries.

These are linked by a giant spiral staircase, as well as the stairs on the side of the building, which offer views of the park.

Mezzanines and balconies link the temporary and permanent exhibition spaces, which present both historical and contemporary Canadian art and sculpture. Roof terraces on top of the stepped gallery boxes also host outdoor displays and activities.

The new exhibition spaces are connected to the museum's existing buildings by a 130-metre-long passageway, which provides a permanent home for local artist Jean-Paul Riopelle's 40-metre-long Hommage à Rosa Luxemburg.

"Through its sheer length and changes in elevation, the passage creates a surprising mixture of gallery spaces that lead the visitor, as if by chance, to the rest of the museum complex," said OMA.

The New York office of the Rotterdam-based firm is part of a team that recently won a competition for a new park in Downtown LA.

It is also working on the drum-shaped Faena Forum cultural centre in Miami Beach, having completed the exhibition design for The Met's Manus x Machina fashion and technology showcase earlier this year.