The range features four designs, each available with plastic straps and soles in 12 different colours, including bright green, orange and pink.

The shoes range from simple flip-flops – with or without heel support – to sandals with a circular toe bar and single fastening, and shoes with multiple, crisscrossing straps.

Sportswear brand Adidas is similarly using reclaimed materials in its running shoes, which feature uppers made from reused plastic harvested from the ocean.

A plastic injection moulding technique was used to create Ipanema's shoes, with the sandal straps attached by hand to the soles, which also bear Starck's trademark plus symbol. 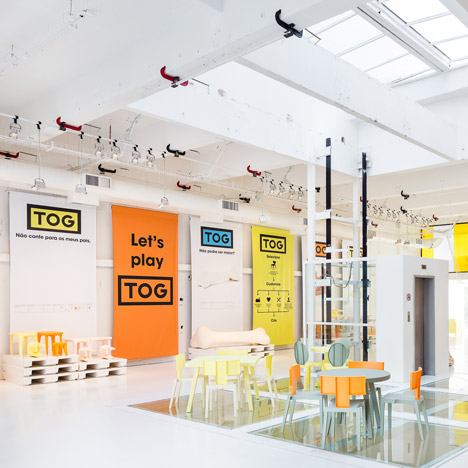 "The Ipanema with Starck collection explores the territory of high elegance paired with the utmost minimalism," said the designer.

Starck's existing body of work includes a customisable furniture showroom, a smartphone-controlled thermostat and a ceiling light that can be rotated with a broom handle.

"When you reach elegance with a few dollars or euros, this is no longer magic; it is a modern miracle," added the designer.

Starck previously experimented with recycled materials for his Broom seating collection for furniture brand Emeco, which was made from discarded material found in lumber factories and industrial plastic plants.

He also addressed waste with a range of taps for Axor that used half as much water as regular taps by spurting a combination of liquid and air.