Sound waves are visualised and cast in concrete to make the cover for Brussels-based musician Thomas Vaquié's album Ecume.

Belgian visual label AntiVJ worked with Swiss artist Yannick Jacquet to turn the album's tracks into physical waveforms, which are arranged into topographical imagery reminiscent of the surface of the moon.

Jacquet used a custom digital visualisation tool to analyse the songs. The artist then 3D-printed these "sonic landscapes", and used a silicone mould of that print to create a concrete cast.

The piece was lit and photographed for the album's artwork, which features matt and laminate sections to echo the texture of the concrete.

The label also created a limited edition of 25 dark resin versions of the album artwork, cast from the original mould. These feature a rough, ridged surface.

"At at time when music seems to be forced – too often and too hard it feels – to be augmented or justified by visual impact, AntiVJ Recordings wants to reaffirm the capacity held within the medium of sound itself to feed the imagination," said the label. 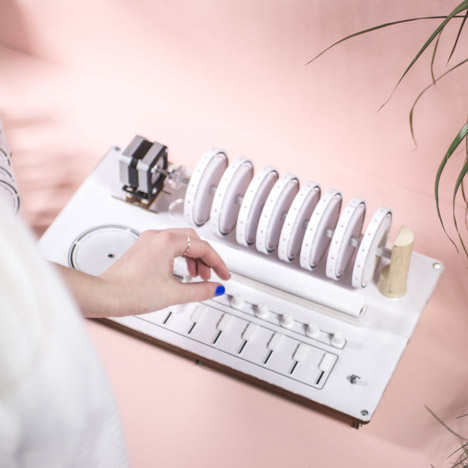 "In a digital age, AntiVJ Recordings wants to release physical objects, carefully crafted, that may take the form of vinyl, a plate built in concrete, a 3D-printed object, an audio book or an application."

Ecume features pieces composed by Thomas Vaquié for site-specific installations created by AntiVJ, and is the first release on its AntiVJ Recordings label.

Each track on Ecume was composed as "a response to place and space, to light and architecture, to code and motion".

AntiVJ has completed several installation projects, including projection-mapping flashing patterns onto a dome in Wroclaw, Poland and designing a digital dystopian city.