Called the XOXX Composer, the machine consists of a plywood body with a set of rotating discs that trigger different sounds as they turn.

A computer is used to record and store the audio samples used by the device, and a series of knobs can control the speed and frequency of the percussive noises.

The machine sits on angled legs, which can be removed for transportation. A pole towards the back supports the eight wooden discs, which are arranged at even spaces along its length. It slots into a wooden support at one end, and at the other end is fitted into a motor that turns it.

Each disc has 16 indents on its outside edge, divided visually using coloured lines to represent four bars of music or sounds. Neodymium magnets embedded in the discs allow each indent to be filled with a small metal ball. 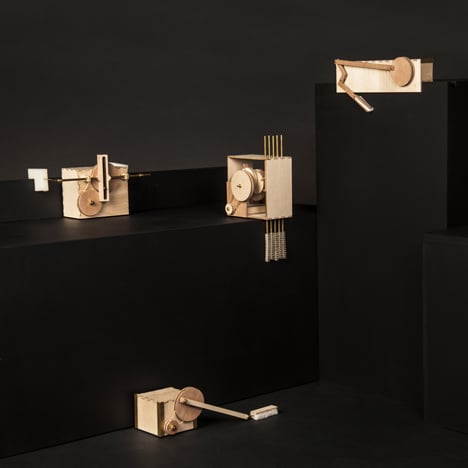 Of the four indents in each section, one is marked on the outside of the disc with an O and the other three with an X.

"This way it is easy to get an overview and navigate the interface," explained Bluhme. "When creating a classic house kick-drum pattern, for example, you would place a magnet on all the Os on one disc."

As the discs turn, the balls create a connection with the device's electronic interface – hidden underneath the plywood body and held in place with a sheet of acrylic – triggering a sound effect from a computer.

"The motor is fastened in T-slot rails and elastic strings underneath so that it slides back and allows the set of discs to be easily exchanged – like saving a song," he added.

Each disc also has its own control knob in front of it. These slide up and down to change the frequency of sounds and introduce different audio effects.

"You can choose one effect per sound and manipulate it into something completely different on the fly," said Bluhme. "I think the next step is to add a feature that lets you automate the effect – adding the dimension of time. That would allow more melodic sequences."

For his demonstration model, Bluhme used a small Arduino computer with a WAV Trigger – an audio player that can play and blend high quality sound files – to store and play the audio samples.

Bluhme said the machine could also be connected to a computer via a USB cable and used with a digital audio program such as Ableton, to create more complex musical arrangements.

"In the music world I feel there has been an increasing polarisation between digital and analogue and as a musician or DJ you sort of have to pick sides," said Bluhme. "I would like to think this object can act as a bridge between those two spaces."

The drum machine was developed as a project for a module run by the RCA's Design Products and Information Experience Design departments, called the De-Computation elective.

Although the XOXX Composer is currently a prototype, Bluhme said he had already received a number of emails asking if the device could be purchased.

"I also had a response from a music teacher who wanted to use it to explain the dynamics of electronic music-making to children," he said. "That made me happy. I think that seeing rhythmic composition and construction three-dimensionally is a very cognitive approach."

Bluhme is currently working on a new version of the device for an exhibition of projects produced by students on the RCA elective from 14 to 16 May at the Ugly Duck in Bermondsey, south London.