The Pure Human range uses DNA sourced from labels in McQueen's first collection, Jack the Ripper Stalks His Victims, which contain locks of the designer's hair housed in perspex.

After extracting the genetic material and implementing it into a cell culture, Gorjanc's process involves harvesting the cells into skin tissue. This would be tanned and processed into human leather with the view to using it in bags, jackets and backpacks.

Gorjanc filed a patent application in May 2016, which would cover the material made from McQueen's genetic information using this particular chain of processes.

"The Pure Human project was designed as a critical design project that aims to address shortcomings concerning the protection of biological information and move the debate forward using current legal structures," Gorjanc said. 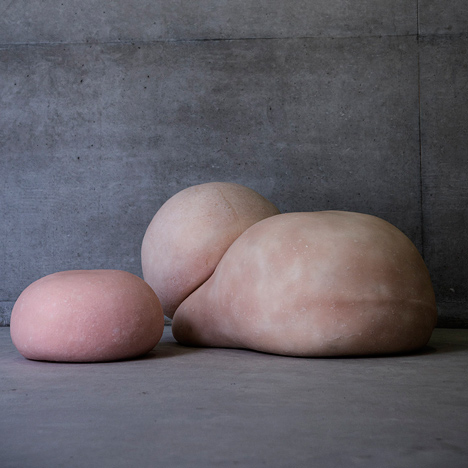 "If a student like me was able to patent a material extracted from Alexander McQueen's biological information as there was no legislation to stop me, we can only imagine what big corporations with bigger funding are going to be capable of doing in the future."

She chose pig skin offcuts because of their resemblance to human skin, and applied layers of colour and silicon to the leather's surface to enhance the similarity.

Several "freckles" were added to the skin, while a jacket included in the collection has been tattooed to imitate the design and location of tattoos on the fashion designer's own body.

Although the project is currently conceptual, Gorjanc has been working with a laboratory to successfully grow a skin sample using the process.

The owner of McQueen's Jack the Ripper Stalks His Victims collection has agreed to potentially contribute a hair from a design once the process has been perfected.

McQueen, himself a former Central Saint Martins student, died in 2010 aged 40. He was described by his collaborator and friend Shaun Leane as having "changed the silhouette of fashion" in an interview with Dezeen.

Gorjanc said she was able to create the collection and file the patent because legislation does not limit the commercial usage of human genetic materials.

She cites a 1990 legal case in which leukaemia patient John Moore had biological material extracted and patented by his doctor. Although Moore filed a lawsuit, the jury concluded that bodily tissue obtained by samples is not considered stolen, and belongs to the institution that extracted it.

The Real Human collection is also a comment on the ever-more demanding luxury market, and its focus on rarity and bespoke or highly personalised products.

"The growing appetite of the industry to indulge in the exotic is shifting its interest towards undiscovered domains and technologies that are redefining the value of luxury," she said.

Icelandic fashion designer Sruli Recht has also questioned the boundaries between luxury and revulsion, by adding a strip of his own surgically removed skin to a 24 carat gold ring.

In contrast, these realistically fleshy and bulbous seats by Gigi Barker have only been designed to resemble human skin.