The exhibition, to be held from 22 to 25 September 2016, will focus on the tradition and heritage behind modern Norwegian design.

Fraser, who was previously deputy director of the London Design Festival, hopes the exhibition will challenge people's expectations about what Norwegian design looks like.

"I'm keen to inject a new energy and outlook that breaks from any preconceptions of what Norwegian design is, particularly in light of the Scandinavian stereotypes," said Fraser. 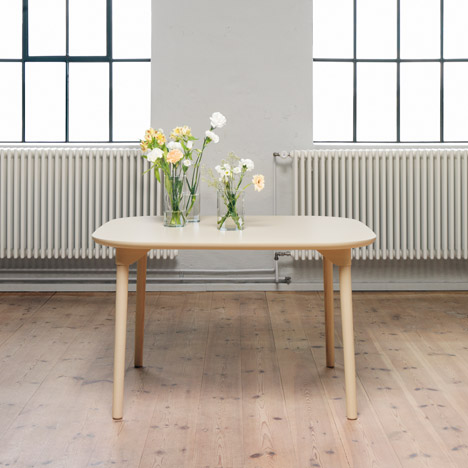 Each of the 17 exhibiting designers were challenged to create new products that engage with the country's design history.

Some pieces – including furniture, homewares, lighting and ceramics – have been created in response to classic midcentury works, while others explore the properties and possibilities of typical Norwegian materials and techniques.

Examples of products due to go on show include Ann Kristin Einarsen's self-watering stoneware planter, and Nils Henrik Stensrud's series of side tables crafted from recycled aluminium.

Oslo designers Torbjørn Anderssen and Espen Voll will exhibit a series of tables for Fjordfiesta, a set of blankets inspired by the Norwegian tradition of woven wall coverings, and a cast-iron tea light holder called Glo.

Andreas Bergsaker will return to 100% Norway for his second year, presenting his modern interpretation of a pyntehåndklehylle – a wooden hanging rail found in traditional Norwegian kitchens.

Bergen designer Cecilia Xinyu Zhang has created a series of mirrors – one from a sheet of reflective film on a piece of bent plywood, and the other with polished corroded metal.

The exhibition space will be designed by London-based design duo Hunting & Narud, who previously created the set for both the 2012 and 2013 100% Norway exhibitions.

100% Norway is a collaboration between the Norwegian Centre for Design and Architecture (DogA), the Norwegian Embassy in London and the Norwegian Ministry of Foreign Affairs, in partnership with Max Fraser.

Other installations planned for London Design Festival 2016 include a smile-shaped tunnel by architect Alison Brooks and a landmark project by London architecture studio dRMM that will comprise a series of box-like structures.

A crazy golf course designed by architects and designers including Tom Dixon, Paul Smith and the late Zaha Hadid was due to take over Trafalgar Square but was pulled from the schedule following a failed Kickstarter campaign.