The building's pigmented concrete shell is intended as a twist on the fire station's traditional blazing red colouring, and a spiralling staircase replaces the customary fireman's pole.

"All surfaces have been realised with pigmented concrete to remark the building's monolithic character," said Frank Oberlerchner of Pedevilla Architects.

"The red colour is a sign of the building's function and underscores its independence. It emphasises the originality of the new fire station." 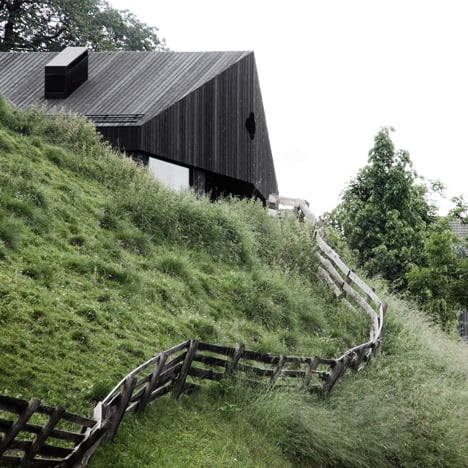 The rose-tinted structure is named simply Feuerwehr Vierschach, as it serves the village of Vierschach, which is located in the remote Puster Valley on the Italian-Austrian border.

The building is set over two levels. The staircase, with a curling red balustrade, is set into a niche at one end.

A large ramping forecourt disguises the base of the building from the village, but the full height of the structure is revealed from the other side of the site.

Both entrance points to the building feature red-framed glazing to match the colouring of the concrete.

An events hall set on the upper floor of the building is lined with wood panelling made from hand-planed pine, while the garage on the lower floor has a more utilitarian appearance with exposed concrete surfaces and strip lighting.

Black furniture and cabinetry provide a common thread between the two parts of the building.

Irregularities in the concrete, both within and on the outside of the building, have been left exposed to add detail to the simple form.

"Irregularities or divergences in the concrete only adds charm to the material and the character of the building," said Oberlerchner.

He said the exposed concrete construction was in part selected due to its durability, creating a water- and frost-proof enclosure during the valley's snowy winters.

"As to the building's economic efficiency, particular attention was paid to the attainment of a robust and simple construction, the usage of only a few materials and to reduction of work stages to a minimum," he added.

The studio, which was founded by brothers Armin and Alexander Pedevilla in 2005, has previously designed a pair of cabins in South Tyrol.

In contrast to the fire station, the properties – one used by Armin as a family home and the other as a holiday home – reference the style of local Alpine architecture.