For the construction of Double-Stick Residence, the studio took the opportunity to use one of the adhesive products by 3M – which makes everything from post-it notes to automotive body filler.

The architects chose a high-strength tape that was originally developed for use on aircraft to stick the anodised aluminium panels to the facades, overlapping them with staggered joints to mimic the coursing of a brick wall.

"To our knowledge it is the first application for a residential home," said Studio Pali Fekete.

Zoning regulations prevented building any more than 14 feet (4.25 metres) above the site's grade, so the residence was designed as a single-storey volume perched atop an existing flat pad.

"The single-storey house is a rational arrangement of equal bays with private and public functions on either side of two courts that create a swath of light, water and space through the middle of the building," said the architects.

A skylight runs the length of the narrow three-bedroom house, illuminating its central rooms. The central spine serves as the building's main circulation axis, and programme functions are organised on either side.

Visitors enter through a opening in the north side of the building. They pass a small water basin in the hall, which leads them to a foyer in the middle of the house.

The entire southwestern corner is occupied by the master suite, which encompasses two bedrooms, two bathrooms, a shared sitting room and walk-in wardrobe. 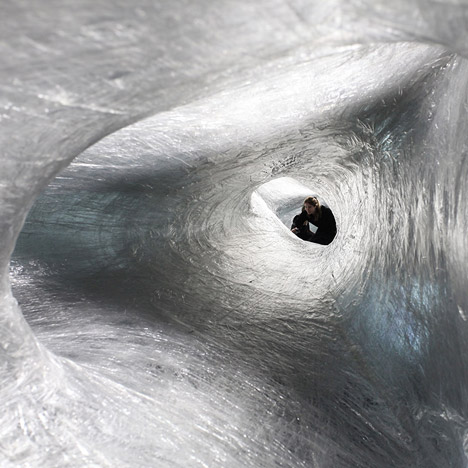 Public functions occupy the eastern portion, where the architects laid out the kitchen and a family room.

Living and dining rooms occupy the middle of the house, between the master bedrooms and the public spaces.

A guest bedroom was also included in the northeastern corner of the 5,000-square-foot (464.5 square metres) house. It has direct access to a secondary outdoor space on the building's north side.

To the south, a 25-foot (7.5 metre) cantilever projects above a swimming pool. It provides protection from the California sun, in addition to framing views of the Los Angeles basin beyond.

"With a deliberately limited material pallet the house forms a set of protected quiet spaces for contemplating the landscape," Studio Pali Fekete said.

The entire southern facade is made up of sliding glass doors that allow the house to open fully and be cooled by mountain breezes.

A consistent floor material was chosen throughout, which creates "a massive plinth that the rest of the house sits on," according to the architects.

Other homes in Los Angeles include a hillside residence with a parking lot that doubles as a rooftop terrace and a geometric black residence designed by students local architecture school SCI-Arc.