Rio 2016: American artist Anthony Howe has designed a large kinetic sculpture to heighten the impact of the modest-sized cauldron during the opening ceremony of the 2016 Olympic games (+ movie).

Anthony Howe created the huge moving sculpture to amplify and reflect the light from the relatively small Olympic cauldron during this year's opening ceremony, which was held on Friday at the Maracanã Stadium.

The metal sculpture is made up of hundreds of reflective spheres and plates organised concentrically around the cauldron and supported by a metal ring.

Each piece is designed to rotate independently around the ring, creating a pulsating movement and millions of reflections from the cauldron's flame.

"My vision was to replicate the sun, using movement to mimic its pulsing energy and reflection of light," said the artist.

"I hope what people take away from the cauldron, the opening ceremonies, and the Rio games themselves is that there are no limits to what a human being can accomplish."

The sculpture weighs 1,815 kilograms and measures 12.2 metres in diameter.

"Back in August of 2015, I went to work as usual and received an email from the International Olympic Committee, asking me if I would like to do the cauldron for the 2016 summer Olympic Games," said Howe.

"The Olympic Committee did not specify the exact design they wanted me to make. They gave me fairly free reign," he added in a video interview.

"We went through several iterations and what we finally decided on was something that was most like the sun in its energy, reflectivity and light." 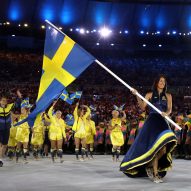 The cauldron itself is a relatively small sphere that contains the olympic flame and sits on a slender column at the centre of the piece.

It was designed to be moved from the Maracanã Stadium to another site in Rio after the opening ceremony, to reflect the fact that the Olympic venues are split into two main parks across the city and allow more visitors to view it.

A theme of this year's games was global warming, and the event's organisers sought to display an Olympic cauldron that would reflect this reality.

Recent designs like Sochi's massive pillar-like receptacle or the icon cauldron by Thomas Heatherwick for London's 2012 games were considered too over-the-top for Rio.

Howe, from Salt Lake City, Utah, is known for his kinetic sculptures. He developed and constructed the Olympic design at his home studio on Orcas Island, Washington State.

The sculpture was completed in Montreal, Québec, before being transported to Rio for the games.

The opening ceremony's technical support setup was designed and constructed by British manufacturing and design firm Stage One – the same firm that worked on the British pavilion for the Milan Expo.

It was responsible for installing a steel wire catenary above the stadium – a rigging system which allowed the aerial choreography of performers and scenery during the show.

The flame was lit by Brazilian marathoner Vanderlei Cordeiro de Lima, after a 46-day journey that began in Olympia, Greece – the birthplace of the Olympics.

Rio de Janeiro's Maracanã Stadium hosted the opening ceremony, and the cauldron will be kept lit in front of the Candelária Church in the city's downtown area for the duration of the competitions.

A smaller version of the cauldron and accompanying sculpture will reside in a new waterfront park after the games.

More about the Olympic and Paralympic games