The museum was designed by New York-based SO-IL and Pennsylvania-based Bohlin Cywinski Jackson, who were chosen through a competition in 2013.

"Our architects have given us a toolbox for testing new ways of using a museum devoted to contemporary art," said Rachel Teagle, the museum's founding director.

"We have galleries that can turn on a dime, outdoor walls that transform into screens, public spaces with free Wi-Fi access, and rooms in which to hold university courses on all kinds of subjects, not just art," she added.

Visible from a nearby highway, the single-storey museum is topped with a vast roof called the Grand Canopy.

Totalling 4,645 square metres, the canopy consists of 910 triangular beams made of perforated aluminium, which are supported by 40 slender steel columns. 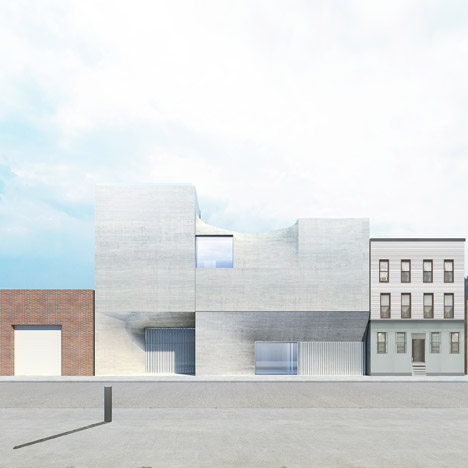 "As many columns as possible are pulled inward to open up the plaza and create cantilevered stretches along the roof's perimeter," the team said.

The canopy arcs as high as 10 metres on the side facing the highway, and dips as low as 3.6 metres near the main entrance.

The patterning is intended to evoke the "patchwork texture and topology of the Central Valley," which is know for its farmland, while the apertures enable shadows and silhouettes to animate the entry plaza.

"Taking cues from agricultural vernacular buildings of the Central Valley, as well as the lush trees of the arboretum on campus, the permeable roof serves as a modulator and projector of light and shade and sets the stage for gatherings on the UC Davis campus," the architects said.

The building's entrance facade consists of curved and straight panels of tempered glass, flanked by walls of ribbed concrete.

The lobby connects to the open-air courtyard, which will host exhibitions, performances and interactive workshops. Two walls in the outdoor space accommodate projections of film and digital artwork.

Wrapping the courtyard are three distinct volumes that contain exhibition areas, as well as space for workshops and administrative functions.

The architects incorporated a number of sustainable elements throughout the facility, including recycled materials, water-conservation features and advanced lighting controls.

For the landscape design, the team used plants common to the area, which are meant to complement the architecture.

The museum's overall layout "invites moments of encounter and wonder, and provides opportunities for informal learning," the architects added.

The museum is named after philanthropists Jan Shrem and Maria Manetti, who contributed $10 million (£7.6 million) the project. The building sits across from the Boora Architects-designed Mondavi Center for the Performing Arts, which opened in 2002 and acts a gateway building for the campus.

Other recent museums in California include The Broad in Los Angeles and the Berkeley Art Museum and Pacific Film Archive (BAMPFA), both designed by Diller Scofidio + Renfro.