Oriol Garcia has overhauled a derelict apartment in Barcelona, removing walls he deemed "light barriers" to create a bright and spacious home that celebrates its historic details (+ slideshow).

Located in the roof space of a three-storey building in Barcelona's Sant Andreu neighbourhood, the flat had been abandoned for years prior to its renovation.

Garcia started his overhaul of the home, called Apartment in Sant Andreu, by breaking down some of the walls the previous tenants had used to compartmentalise the space.

Bookcases and white curtains now loosely define the 45-square-metre apartment into two zones – one for sleeping and bathing, and the other for cooking and lounging.

"The mail goal of this project was clear – it needed much more natural light and a greater breadth of space," explained Garcia. 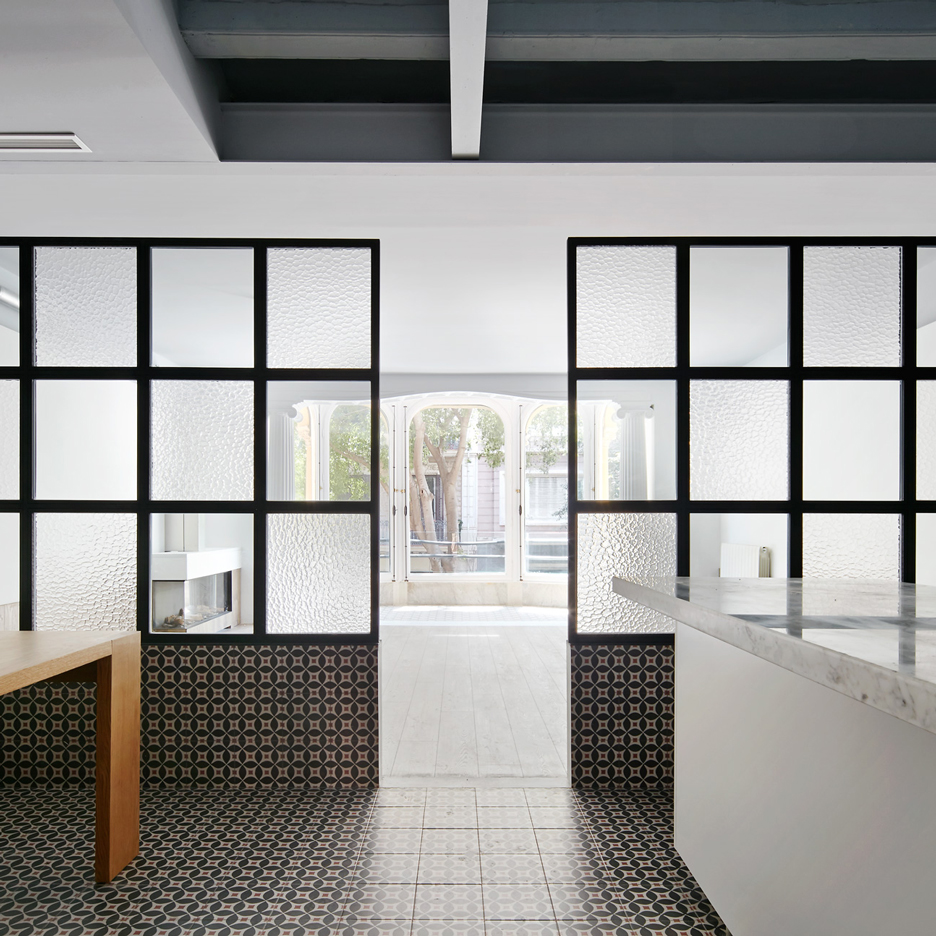 "The solution was also crystal clear," he continued. "All the interior walls that served as light barriers were taken down, and all the fixed elements – such as the kitchen, bathroom, and closets – were mounted up on the lateral perimeter walls."

A sunroom at one end of the apartment opens onto the building's service courtyard. With the removal of a wall between this space and the living room, it becomes the primary source of daylight for the space.

The sunroom is separated from the main body of the apartment by a step in level, as well as by a change in floor surface.

Terracotta-coloured ceramic tiles feature in this area, while the rest of the apartment is covered with patterned tiles. Both are remnants of the original design.

These tiles were in poor condition, but Garcia decided to restore them to preserve the flat's heritage.

He also removed a false ceiling that has masked the wooden beams supporting the building's roof, and in the process gained almost a metre of head height in places.

"The removal of what isn't needed enhances the rich qualities of that which went unnoticed," said Garcia. "With these solutions, the apartment can now benefit much more from its existing windows."

"Uncovering the rooftop's structure plays a crucial role in enhancing its spatial quality, providing a sense of a broader space and bringing order to the new areas."

Behind the white curtain, a small window overlooking a roof terrace provides extra lighting for the bedroom.

No walls separate the bedroom from the bathroom. The shower and toilet are instead placed in a niche behind a glass screen and the sink located at one end of the bedroom.

"The final result is almost loft-like because of the open space capabilities," concluded Garcia.

Photography is by Aitor Estévez.