A large blue unit provides extra space and storage in a compact Barcelona apartment, which has been renovated by local architecture studio NeuronaLab.

The renovation transforms Loft in Poblenou, a former studio loft, into a two-bedroom apartment with a separate, dedicated workspace.

The owner bought the flat 10 years ago, when he was living alone.

The space started to become cramped after his partner moved in and they had a baby. Things became even worse during the pandemic, with the couple needing to work from home, and their son increasingly needing more space.

"The family had no choice but to have all their objects in the middle of the space; it was a real mess," said NeuronaLab founder Ana Garcia.

"The challenge was to make much better use of the volume, so that the new family would not have to change homes due to lack of space and order," she told Dezeen.

Garcia's solution was to insert a large piece of furniture that informally divides the space into different zones and provides plenty of storage.

She has also taken advantage of the loft's high ceilings by installing a new mezzanine floor, which is accessed via a staircase built into the storage unit.

With these two interventions, plus the relocation of the old bathroom, the apartment now has a completely different layout.

The space in front of the storage unit becomes an open-plan living and dining space. A bedroom and study are located behind, with the new bathroom sandwiched in between, while the mezzanine overhead creates a second bedroom.

"Four spaces are generated that are similar in size and interchangeable with each other," said Garcia.

"On the other hand, the mezzanine allows a certain disorder on the higher level, which remains out of sight on a day-to-day basis, such as the toys or the children's bed."

Garcia developed two possible colour schemes for the space, with the owners eventually settling on blue rather than pink.

An aquamarine shade was selected for its natural contrast with the warm tones of the loft's wooden floorboards, which have been revived using water-based varnishes. 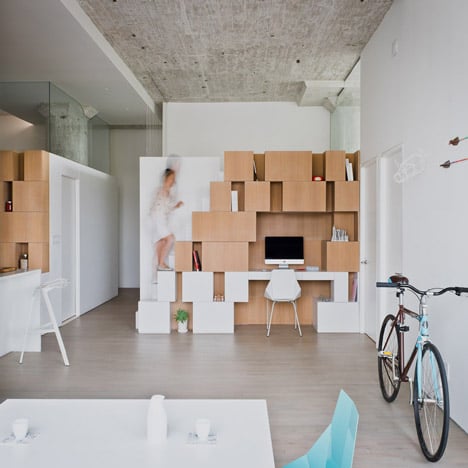 Made from pressed, recycled cellulose panels, this unit serves various different storage purposes. It contains the fridge-freezer and food larder, it serves as a wardrobe and it creates room for utility items such as an ironing board.

The layout was carefully planned to ensure everything had a place.

"We made a list of everything that we had to relocate in the proposed cabinets," explained Garcia, "and we measured the approximate volume of storage needed."

Garcia was previously a founding director of Nook Architects, but recently left the practice to launch her own studio.

Nook is a specialist in creating space-saving solutions for small homes, with previous examples including a flat with a storage floor and one with a mezzanine bed deck.

Garcia continues this approach, but also introduced elements of psychology and neuroscience to her design process. Her aim is to create homes that don't just work well, but also promote wellbeing.

"At NeuronaLab, our initial questionnaires go far beyond the typical briefing of a project," she explained. "We not only ask about the number of bedrooms, but we delve into a client's routines, their lifestyle, their chronotype, if they receive guests, if they exercise at home and how they need the space to respond to the new needs of the home office."

"We also analyse the space from parameters beyond proportion or functionality," she continued.

"We visit the house at different times of the day to observe the change in the light that enters through the double facade, we analyse the cross ventilation, the smells and also the noise from the environment."

"The higher height encourages common life and social relations with guests, and the lower height in the darkest area favours rest," she added.

The choice of materials supports this ambition. Garcia opted for breathable and moisture-absorbing products – including ceramic tiles by Matter Atelier – to improve air quality inside the home.

Photography is by Marcela Grassi.