Dezeen promotion: architects and designers are invited to submit projects that feature Spanish-made ceramics to the Tile of Spain Awards 2016 (+ slideshow).

This year will mark the 15th edition of the annual awards programme, which is organised by the Spanish Ceramic Tile Manufacturer's Association.

It is open to international architecture firms, interior design studios and students that have used ceramics made by Spanish companies in their projects.

The prize fund of €39,000 (£33,645) will be divided between three categories: architecture, interior design and student degree projects.

The jury, which will be chaired by Portuguese architect Gonçalo Byrneand, includes Elisa Valero – author and professor at the Granada School of Architecture – and Iñaqui Carnicero, a lecturer at Cornell University and the organiser of the Golden Lion-winning Spanish Pavilion at the 2016 Venice Biennale. 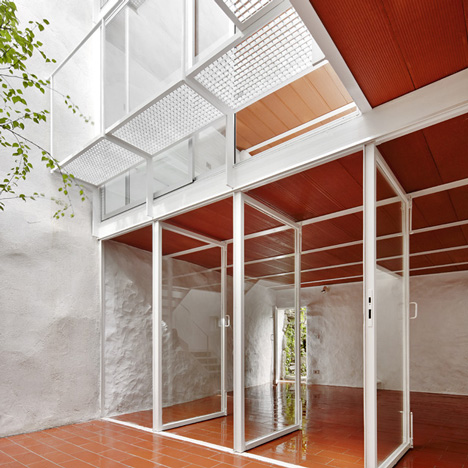 The 2015 prize for interior design went to El Equipo Creativo for its Blue Wave Cocktail Bar in Barcelona. The floors, walls and ceilings are covered in bespoke shell-shaped tiles.

"The interior of the Blue Wave Cocktail Bar recreates a wave about to break and an aquatic atmosphere full of reflections and hues," said El Equipo Creativo.

"We wanted to use a predominant material which was both versatile and fragmented and which could be applied equally on walls, ceilings and floors in an attempt to generate a unitary space, enveloping and dynamic."

The team's Disfrutar Restaurant, also in Barcelona, was given a special mention. The project makes colourful use of a variety of tiles, which reference the shades of the spices sold at the nearby Ninot Market.

"The restaurant has three very distinct zones, with different atmospheres but one common idea: to reflect naturalness, humility and respect for the history and heritage of the Mediterranean," said the designers.

"Our intention was to use a material which came in different finishes and which could be implemented in a variety of ways while serving as a link between the spaces."

Entry to this year's awards is free and submissions are being accepted until 26 October 2016.

For further information and to download the application forms to enter, visit the Tile of Spain Awards website.

Tile of Spain is the voice of the Spanish tile industry, encompassing more than 100 tile manufacturers. Renowned for its blend of aesthetic and technical innovation, Spanish tiles draw on a rich heritage of skill and creativity, while remaining at the cutting edge of design.

Since 2004, Tile of Spain has set up and continuously supported ceramic studies programmes at leading schools of architecture, including University of Darmstadt, The Harvard University, The University of Liverpool, as well as top architecture schools in Barcelona, Alicante, Valencia, Madrid and Castellon.

The association has a tradition of hosting professional seminars for the architectural community in the UK and around the world and each year the prestigious Tile of Spain Awards honour the creative use of ceramics in architecture, interior design and student work.

The fifteenth edition of the Tile of Spain Awards is now open for entries, welcoming project submissions from international architects, interior designers and architecture students.

Projects can be located anywhere in the world, but must make significant use of Spanish ceramics and must have been completed between January 2014 and October 2016.

The jury chairman is the Portuguese architect, author and lecturer Gonçalo Byrne, holder of the Gold Medal of the French Academy of Architecture, as well as Rome's Piranesi Award.

The panel of judges also includes Elisa Valero, author and professor at the Granada School of Architecture; Iñaqui Carnicero, lecturer at Cornell University and organiser of the Spanish Pavilion exhibition at the XV Venice Biennale; and Nani Marquina, Spanish designer and founder of Nanimarquina.

Portuguese architect and lecturer Nuno Brandão Costa will also be on the panel, as will Spanish architect and founding member of the Castellon Ceramic Design Centre Ramón Monfort and architecture lecturer and editor Ricardo Sánchez Lampreave.