A concrete screen wraps the upper storey of this villa in Buenos Aires Province, blinkering bedroom windows from the street and directing views into a planted courtyard (+ slideshow).

The property, named Lamas House, is located in a residential neighbourhood in Tigre, a town to the north of Buenos Aires city.

A courtyard and porch are cut into two corners of the building, opening the ground level to the street. But the upper floor is surrounded by an opaque band of concrete intended to preserve privacy.

"The project is intended to be a criticism of the type of detached-house or typical villa, which swarms today's gated communities," said architects Ignacio Montaldo and Eugenio Ottolenghi.

"The project seeks to close itself off as much as possible to the street and neighbours."

Two offices and a living space connect to the courtyard and a pool at ground level, while the main living space is located upstairs. 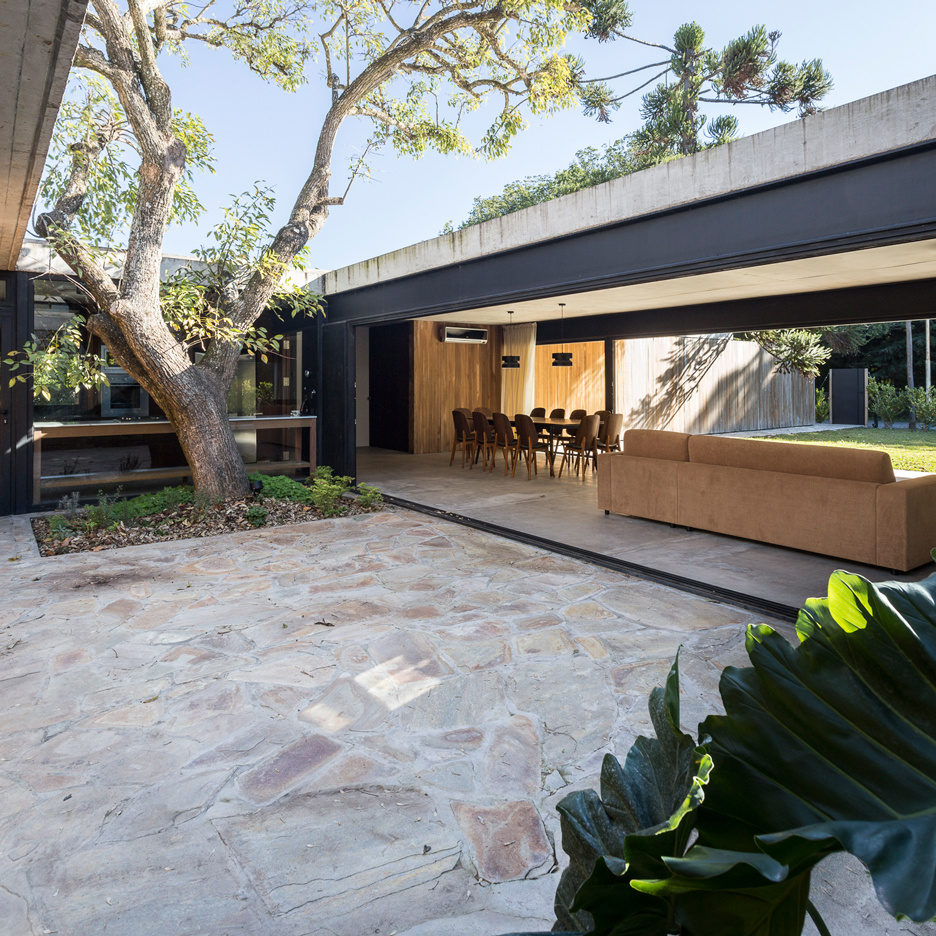 Here, the windows of the lounge, dining room, bedroom and bathroom are obscured by the strip of concrete. It angles out from the body of the house to complete the rectilinear outline of the upper storey.

The concrete band not only creates a screen but directs views from the upper floor down into the courtyard, which is planted with three flowering jacaranda trees.

Architect Abraham Cota Paredes used a similar technique to hood the upper storey of his House to the Sky in Mexico. Like in Lamas House, this feature is intended to create a more introspective atmosphere.

While the front of Lamas House appears windowless, an abundance of glazing faces onto a lawn that slopes down to the edge of a river at the rear.

"In the atrium, three flower-jacarandas have been planted, which provide a significant change of colour, and thus feel, to the space with the passing of the seasons," said the architects.

The suspended screen is made possible by the use of a combination of reinforced concrete and steel columns.

The concrete was formed within a eucalyptus wood structure, and indentations of the outline and grain of the planks have been left in the outer walls of the house.

The concrete surfaces have a smoother appearance on the interior of the house, where the material was cast over laminated phenolic plastic boards.

White curtains drape the floor-to-ceiling glazing on both the upper and lower floors and a row of white sun awnings project from the rear of the building to shade a narrow terrace facing the river.

Photography is by Albano Garcia.