The four-storey house, which dates back to 1927, was originally designed by Swiss architect Hans Bernoulli as part of an affordable housing development in the city centre that has become highly sought-after in recent years.

Schmid purchased one of the houses in the now-listed Bernoullihäuser development as a family home for himself, his partner and their two young children.

He immediately set about removing earlier renovations to reveal the building's original features, and introduced a palette of new materials to modernise the space.

"With a bit luck we were able to purchase one of the Bernoulli houses last summer," said Schmid.

"As a self-employed architect, I was immediately working on the re-design of the house and the preparation of the building application," he added. "The house has already been refurbished several times. One of the tasks was to revive the original materials to the initial state."

Schmid selected materials that would highlight rather than hide his renovation works. 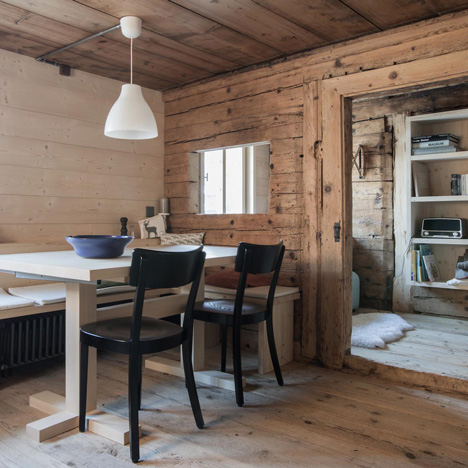 A new pale grey floor in the kitchen – made from the mineral anhydrite – distinguishes itself from the original herringbone-patterned parquet in the living room, and niches and walls in the kitchen are lined with coarse oriented strand board.

"It was important for us that the difference between new and old is clearly defined," explained Schmid.

"The atypical choice of rather industrial materials is a striking contrast to the original state and characterised the house in its new expression."

Elsewhere, bare floorboards are paired with white walls, tiled cabinetry and furniture to create a pared-back appearance. The children's room is the one exception, and is decorated with brightly coloured transfers and textiles.

The whole renovation was carried out in three months – a tight deadline imposed by the arrival of the couple's second child.

Photography is by Radek Brunecky.