This Ukrainian house by Azovskiy & Pahomova Architects features a staircase with cantilevered wooden treads, as well as a hay-bale seating area and glass-fronted shower in the living room (+ slideshow).

Local studio Azovskiy & Pahomova Architects refurbished and extended the two-storey building on the grounds of an existing property in the Dnepropetrovsk region, adding a series of unusual features requested by the client.

Situated next to a river in a landscaped garden, the 180-square-metre dwelling is intended as a retreat for the client's family and friends that makes the most of its natural surroundings.

"The main goal was to open up a panoramic view and to integrate nature into the house," the architects told Dezeen. "We had to create the feeling that you are not in the house but are outdoors, and of course we had to make a comfortable atmosphere."

The architects used extensive glazing to achieve this goal, with full-height windows around the living area on the ground floor.

A shower in one corner of the room is separated from the rest of the space by a glass screen so its user is able to continue enjoying the view. 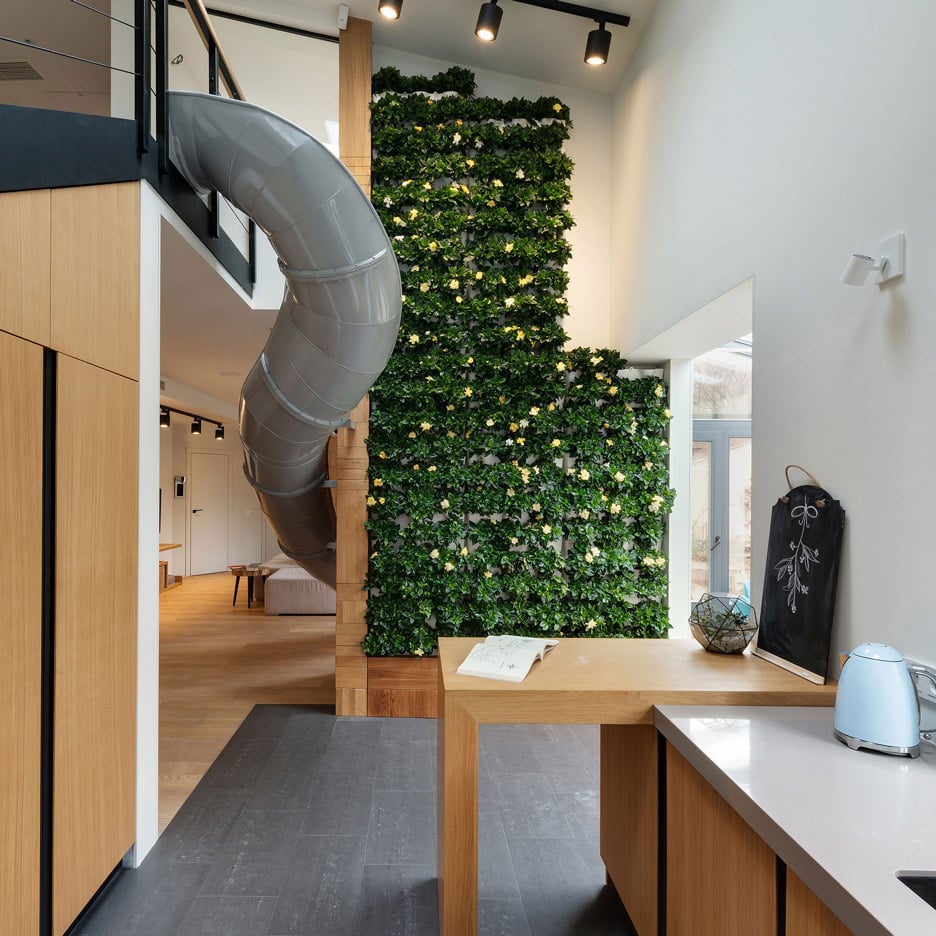 "A special feature of the house is to be open in everything," said the architects. "There are no secrets, everything is natural. But for shy people, there is another more private bathroom."

Between the shower and a sunken sofa is a space filled with hay that was installed at the owner's request, as he enjoys lying in hay after bathing.

The house's pitched roof follows the slope of the site and the decision not to include drainpipes means rainwater pours from the shingle-covered roof directly onto a line of stones in front of the large windows.

A glazed corner that looks out onto a sheltered terrace incorporates the main entrance. Next to the terrace is a steam room housed behind a timber-clad wall, while a Japanese ofuro bathtub is situated amongst the pine trees close to the house.

A globular fireplace suspended from the living room ceiling provides a feature at the centre of a space. The client insisted there should be no television to distract attention away from the views.

A step leads up from the living room to a more intimate kitchen area, which receives daylight from the stairwell and from a glazed wall incorporating a door that opens onto a small deck.

The cantilevered wooden treads of the staircase rise up through an opening in the ceiling into a bedroom and music room that occupies the whole of the upper level.

One of the bedroom's walls is entirely glazed to provide a view of the neighbouring trees, while another is covered with a slate-like tile. A fireplace with a reflective hood is positioned opposite the window.

Photography is by A Avdeenko.