Called the Beus Center for Law and Society, the academic building is located on the Arizona State University (ASU) campus in downtown Phoenix, in a newly invigorated area with retail space, a bookstore and a cafe. It serves as the main home for the Sandra Day O'Connor College of Law.

"The building, which was conceived and developed with openness to the public in mind, creates a unique urban environment that encourages vibrant connections," said Ennead.

The building is composed of two wings, with front facades partly raised off the ground and supported by columns.

A plaza and pedestrian pathway sit between the two wings and bring visitors into the core of the facility.

Above are open-air sky bridges, along with glazed boxes that contain a reading room on the north and a think-tank space on the south.

On the fifth floor, a shaded courtyard stretches between the wings.

The exterior is clad in local sandstone, glass and aluminium. The positioning of windows, as well as their size, was based on solar exposure and programmatic requirements.

At ground level, a large digital media display – which promotes upcoming events and current legal topics – activates the street and reminds passers-by of "the many ways that law shapes society".

The building's first level houses a double-height Great Hall that features a retractable seating system devised by the architect. Unlike traditional systems, where the chairs and platforms are attached and retract together, this system has separated components. 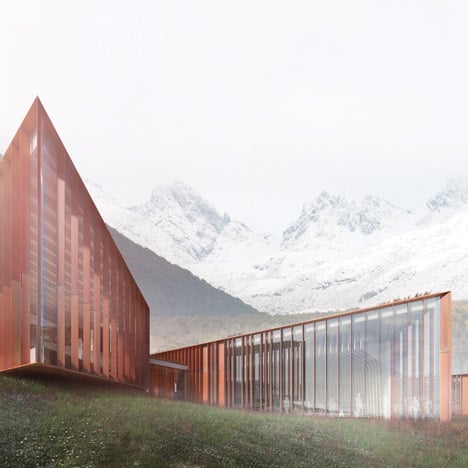 "The design team developed a motorised tray-like system that allows for each row of auditorium chairs to be deployed independently and concealed within the individual tiers," the architects said. When chairs are retracted, wooden steps serve as a casual gathering space.

The upper portions of the building contain classrooms, study areas and a library. "Library stacks and study spaces extend to the upper levels and serve as the primary circulation paths, which promote intellectual and social interchange between students, faculty and visitors," the team said.

Sustainability was a driving concern during the design process. The team incorporated energy-efficient technologies, including chilled beams and under-floor displacement cooling. The centre is expected to consume 37 per cent less energy than a comparable facility.

The building marks a new chapter for the law school, which formerly was located on ASU's primary campus in Tempe, a suburban community in the Phoenix metropolis.

Moving to the urban core enables the school to be closer to a courthouse and the city's legal community.

The school offers a public-interest law clinic, along with America's first nonprofit teaching law firm. The new centre is "designed to act as an institutional change agent, dedicated to educating students and citizens on the importance of the law in shaping civil society".

Other new academic buildings include a medical centre at Columbia University in New York by Diller, Scofidio + Renfro and an education centre in Mexico by Studiohuerta.