Ennead Architects has been selected to design a research centre near Cape Horn, the southernmost tip of South America, which will promote study and ecological tourism in the remote region (+ slideshow).

The Chilean government appointed New York-based Ennead to work with local architects Cristian Sanhueza and Cristian Ostertag on the Cape Horn Sub-Antarctic Research Center, as a result of a public competition.

Featuring a cladding of pre-weathered steel, the design for the centre takes its inspiration from the dramatic landscape of the site, within the UNESCO Cape Horn Biosphere Reserve on Navarino Island.

"It's about as far south as you can get without going to Antarctica," said Richard Olcott, a principal at Ennead.

The region is a temperate rainforest with a delicate ecology, including one of the world's most diverse collections of lichen.

The centre will host programmes in education, sustainable tourism, and subantarctic research across a range of disciplines. The building comprises a series of three pavilions, one for each programmatic area, linked by a glazed bridge structure.

Set into the side of a bluff, each pavilion emerges out of the land to form a peak, evoking the mountain ranges all around the site. 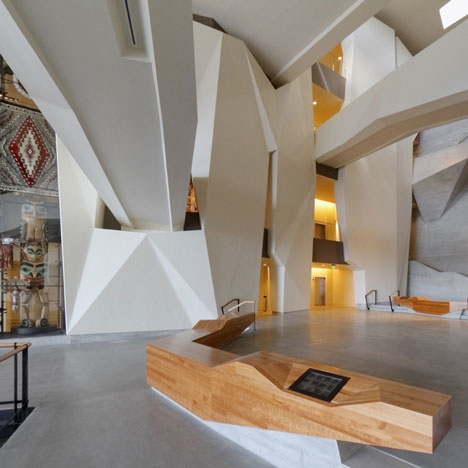 The building takes advantage of the site's thermal mass and captures natural light from the north for positive heat gain, and is topped by green roofs.

"We didn't want to make a big building," Olcott said. "We wanted it to be set into the land and be highly efficient."

The building's rusty cladding will be Corten steel – a type of pre-weathered metal that forms a self-sealing layer of rust around the structure and requires no maintenance. "There's so much weather here, so much rain," said Olcott. The material's reddish hue also matches the colours of the local flora.

The use of long-lasting materials was of the utmost importance since everything must be imported to the remote region.

The centre's auditorium interior is wrapped in wood. "It's a bit like the inside of a boat," Olcott said, noting its resemblance to the canoes and baskets of the region's native peoples.

The research facility is a collaborative venture between the University of Magallanes, the Institute of Ecology and Biodiversity, and the Omoro Foundation in Chile, and is also associated with the University of North Texas in the US.

Ennead Architects is known for a variety of cultural, institutional, and commercial projects, ranging from the Natural History Museum in Salt Lake City to the renovation and expansion of the Yale University Art Gallery, as well as the Standard Hotel straddling the High Line park in New York.