While keeping the outside intact, Lovefone has retrofitted the phone booth with a workspace for a single repairperson.

Designed by Battersea Power Station architect Giles Gilbert Scott, the red phone booths are internationally recognised symbols of British culture but have been rendered obsolete by the rise of mobile technology.

In recent years, the booths – some 2000 of which are heritage listed – have been adapted for new uses like micro work spaces, sandwich shops, libraries and galleries.

Lovefone CEO and co-founder Rob Kerr described the project as "a design challenge" due to the structures being made of cast iron and heritage listed.

The company worked with a designer on the retrofit, which includes a wooden workbench, and storage for tools and parts.

"Our aim was to create an environment that didn't seem or appear crowded despite the fact that we needed to fit in all the equipment, parts and storage for what is in effect a tiny shop," Kerr told Dezeen. 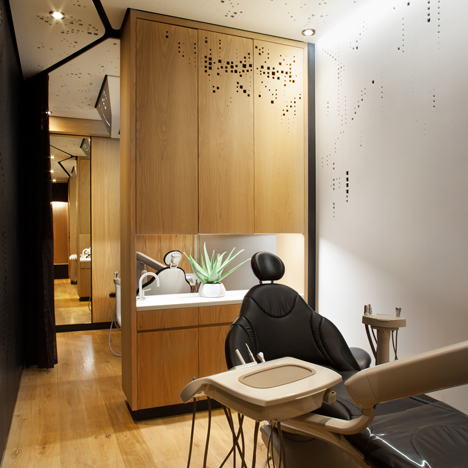 "We also want to keep the windows of the box as open as possible so members of the public can see inside."

A perforated screen behind the bench provides a point of interest, as well as a place to affix a magnetic tool holder at eye level.

While the company initially considered open storage, the final designs feature closed cupboards and drawers for a more clean look.

Kerr said that as well as operating as repair shops, the booths will house free charging docks "in keeping with the idea that these boxes did and should retain an aspect of public service".

The company plans to open six of the repair shops in Greenwich and Knightsbridge initially. It aims to have 35 locations in London in 18 months' time.

A smaller, cheaper version of the K2 was installed in the late 1920s, followed by the short-lived, concrete K3. The most successful version, the K6 model from 1939, was used across the country for decades and is included in the Design Museum's permanent collection.

Lovefone's access to the phone booths is via the Red Kiosk Company, which leases the boxes to small businesses.

Telecoms provider BT runs an Adopt a Kiosk scheme that allows communities, charities or individuals to "buy" a phone booth for £1 and repurpose it for creative uses.