Spiralling skyscrapers are more popular than ever according to a new industry study charting twisted buildings around the world.

The latest report from the Council on Tall Buildings and Urban Habitat (CTBUH) has revealed that there are now 28 skyscrapers with twisted structures either built or under construction.

The tallest of these is Gensler's 632-metre-high Shanghai Tower – currently the second tallest building in the world.

It also features several structures under construction, from the elaborately twisted Diamond Tower in Saudi Arabia to the plant-covered tower shaped like a DNA strand in Taiwan.

CTBUH defines a twisting building as one that progressively rotates its floor plates or its facade as it gains height. 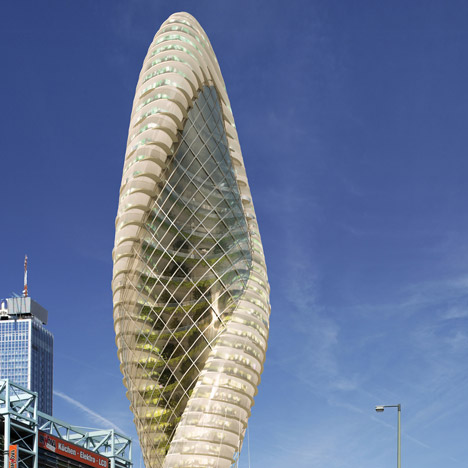 It claims the first twisted skyscraper was the Turning Torso in Malmö, Sweden, completed by Spanish architect Santiago Calatrava in 2005 – just 11 years ago.

The Chicago-based organisation claims the growing trend for twisting towers is "creating a new generation of iconic buildings throughout the world".

"Aided by new technologies assisting architectural and structural design, a proliferation of tall twisting towers is now spreading across the globe," reads the report.

"A stunning variety of textures, view angles and ripple effects result from these manipulations, making these 'twisters' some of the world’s most iconic buildings – and in many cases, aerodynamic and energy-efficient."

The report also acknowledges projects currently on hold, although they haven't been included in the rankings.

The Calatrava-designed Chicago Spire could have become the USA's tallest building, but stalled during the recession, while the revolving skyscraper proposed for Dubai is still on the drawing board.