Canadian firm ZAS has completed a glass and aluminium-clad public library in suburban Toronto, which has a sculptural form influenced by a local rollercoaster (+ slideshow).

Situated within a civic campus, the 3,306-square-metre building sits along a pedestrian promenade that leads to the city hall. The library's "whimsical design" takes cues from a nearby theme park and is meant to stand in contrast to its immediate surroundings.

"The playful form and roof line are inspired by the curved elements of a rollercoaster track at the nearby Wonderland theme park," said ZAS, a Toronto-based firm with additional offices in Vancouver, Abu Dhabi and Dubai.

The library's main entrance is marked by the highest point of the sloping roof. The two-storey building is clad in panels of aluminium and reflective glass, which form a staggered and slanted pattern on the exterior.

"Overlapping glass patterns are suggestive of the library's diverse areas or learning, and also of its diverse demographics," the architect said. "These patterns also help to create an interesting play of light and shadow inside the library."

Rather than full-height glazing, the team incorporated smaller windows to mitigate solar gain and glare, and also to reduce the building to a pedestrian scale. Glazing at street level enables passers-by to view activity within the library.

The building's appearance changes over the course of the day due to its sculptural shape and facade treatment, the architects said.

"The building appears to dissolve from transparent to solid, its geometric form constantly shifting and changing with the daylight," ZAS described. "The ethereal form is permanent yet ghostly, similar to the ever-changing Aurora Borealis."

The facility's programme includes movable book stacks, glass-enclosed meeting rooms, areas for kids and teens, a large study hall and a cafe — all of which wrap a central outdoor courtyard.

The courtyard contains a symbolic red maple tree, referred to as the Tree of Knowledge. 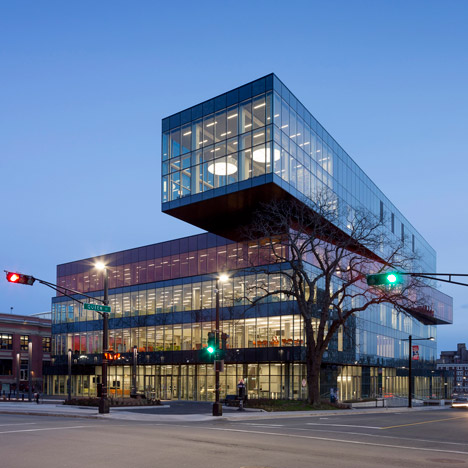 Lounge seating, social zones and individual study spaces are situated along the perimeter, "maximising views and light while creating a direct connection with the neighbourhood beyond," explained ZAS.

The building's programme and design were the result of an extensive project that explored the role of libraries in the digital age. As a result, the library offers amenities that extend far beyond its collection of books, including 3D printers and a recording studio.

"Accessible for all, visitors are encouraged to animate ideas within the library's maker-spaces," the architects said. "Computer modelling and 3D printers, a media suite, a sound recording studio, a video studio and a green screen all create hands-on opportunities to learn, discover curiosities and hone a craft."

On the second floor, a terrace with casual seating overlooks the courtyard below.

"Throughout the building, dynamic multifunctional spaces embody the library's transformation from a place of solitude and reflection to one of social connection and creative discovery," the firm said.

Other libraries in the Americas include a revamped Brutalist building in Kansas featuring a terracotta rain screen and a facility near Vancouver with angled concrete walls and curved windows.

Photography is by doublespace photography.