US firm Gould Evans has revamped a 1970s concrete library in Kansas, wrapping the building in a terracotta rainscreen and adding modern amenities such as a recording studio (+ slideshow).

The Lawrence Public Library, which recently won an American Institute of Architects design award, is located in the downtown area of Lawrence, the sixth largest city in Kansas.

Gould Evans was charged with renovating and expanding a Brutalist-style library, built in 1972 and designed by the local firm Robertson, Peters, Ericson & Williams.

The existing building had numerous issues, including poor thermal performance, ineffective way-finding and a lack of daylighting, according to Gould Evans – a Missouri-based firm with offices in six US cities.

Prior to conceiving the expansion and renovation plan, the project team solicited feedback from Lawrence residents, who helped establish key design considerations.

"The citizens recognised the significance of the library's location in the community and the opportunity it provided to establish a new 'place' within the downtown area," said the firm.

"Gould Evans responded with a design that addresses the changing role of the library: from book repository to multimedia community hub."

The firm wrapped the building with a new structure clad in glass and a terracotta rainscreen. The orange-coloured panels refer to the area's historic red brick architecture, while also helping improve the library's thermal performance.

The new structure contains a "continuous reading room" that occupies all sides of the library.

The facade is opaque in areas where books need protection from light. Slender, horizontal apertures on the exterior bring in natural light, as do skylights and clerestories.

Floor-to-ceiling glass on the corners of the building usher in additional daylight and reveal glimpses of internal activity. The glazing also provides views of the surrounding neighbourhood.

Inside, the firm created a new atrium by cutting out the centre of the original building, with the aim to to make it an "open, light-filled and welcoming place".

The atrium extends from the basement to the roof level, with a glass sculpture by a local artist filling the space with a wide spectrum of colours.

While reconfiguring the interior layout, the firm placed "an emphasis on community gathering places over silent spaces".

The architects incorporated meeting and maker spaces throughout the library, including an auditorium and recording studio complete with a drum set. 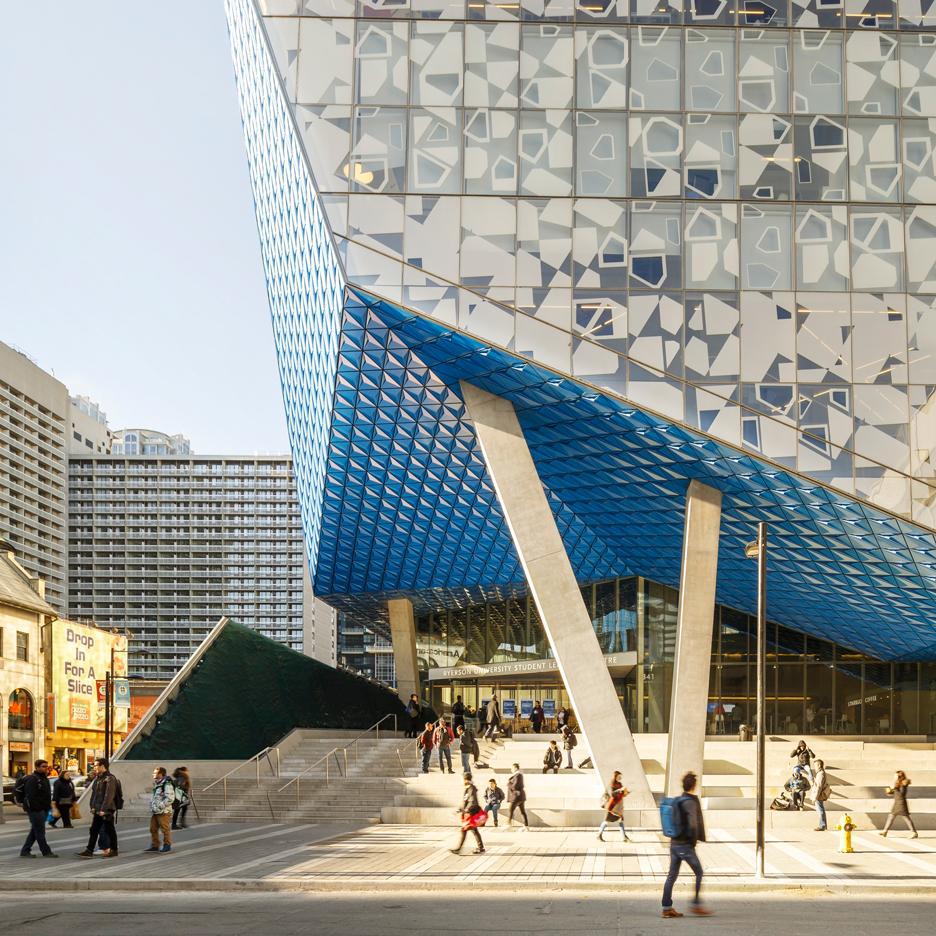 "Lawrence has an active music culture, and the Sound + Vision Room is used by local musicians to make recordings, such as demo tapes," the firm said.

Two distinct zones were created for youngsters. The children's space has play areas, computer stations and reading nooks, while the teen section is organised around spaces for print and electronic media.

"The electronic media spaces are visible to the streetscape along a main pedestrian artery, conveying the library's identity as a 21st-century facility," the firm explained.

In areas once defined by painted concrete walls, the firm used wood panelling to imbue the library with a sense warmth. In the media checkout room, the walls, floor and ceiling are fully sheathed in ash.

The project also entailed the creation of a new park. It features an informal amphitheatre, an events plaza and an area for an ice-skating rink.

"In addition to the planned events, the park provides informal space as an outdoor reading area and as a connector to the community swimming pool and the larger downtown area," the firm said.

The library's usage has grown considerably since the project was finished. Youth program attendance is up 160 per cent, and overall visits have increased 55 per cent over the prior year, according to the firm.

Other recent library projects include a curved building in Chicago's Chinatown by SOM and a miniature wooden library in Toronto by Atelier Kastelic Buffey.

Photography is by Tim Griffith and Mike Sinclair.