Spread out across the fourth and fifth floors of a large former warehouse in the Icelandic capital, Oddsson Ho(s)tel is equipped to accommodate up to 230 guests.

Designed as a cross between a hotel and a hostel, it includes a mixture of basic and luxury rooms arranged along curving hallways. Some have single beds and others bunks, while larger suites with double beds give guests views over Faxa Bay.

Döðlur created custom furniture for the space, and paired them with pieces by 20th-century designers including Alessandro Mendini, Gerrit Rietveld, Pierre Jeanneret and Ettore Sottsass.

"The concept behind Oddsson is contrast, taking different extremes and mixing them together," studio co-director Daniel Atlason told Dezeen.

"This simple but very strong idea not only gave us a design compass but also the freedom to make a totally different hostel from what we are used to," he added. "So basically we are mixing high and low culture together and leaving everything mainstream out."

"I sometimes joke that this is a place for people like me –  poor with expensive taste."

New pieces are inspired by the colours and textures found in the 1940s JL House building, where distressed and brightly coloured surfaces have been left largely unaltered.

There is a dark wood cabinet with blue metal framework, a series of tables with circular tops made from painted wood or marble, and industrial-style fluorescent strip lights.

Bedrooms are furnished with a range of boxy wooden benches, chairs and bunk beds with integrated wardrobes.

A shared bathroom is finished with turquoise tiles, pastel blue floors and a row of saccharine-pink sinks that lend the space the appearance of a 1950s bathroom. 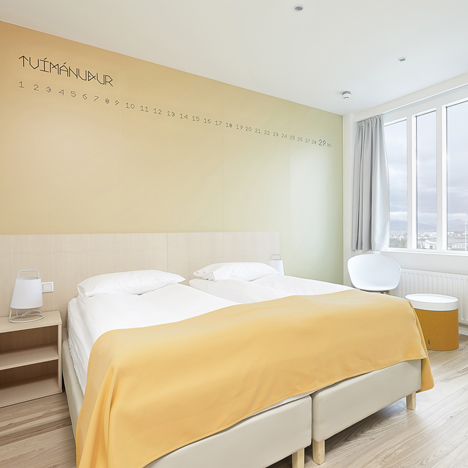 Reykjavík Lights Hotel by TARK and HAF for Keahotels

"The custom-made pieces are inspired by the creativity that can be found in factories, where leftover material – for example pipes and blue profiles – is used to create simple, raw but beautiful furniture," said Atlason.

"Iceland is a very small country, which makes is hard to specialise and compete with the global market," he added. "Despite that there are many talents within the Icelandic design industry and to be able to contribute to its growth is very important for us."

"Being beginners in the hotel design industry we had a pretty steep learning curve. We soon found out that making things simple isn't that simple," continued Atlason.

"We've had to make many many demos and a lot of trips to the blacksmith – so keeping the most of the manufacturing local was not only to strengthen Icelandic production but very practical as well."

While guests have access to kitchen, there is also an onsite bistro and fine-dining Italian restaurant set alongside the reception on the ground floor.

The space also has several unexpected features, including a soundproofed karaoke room and a take-away menu offering caviar.

Guests have access to a movie room, rooftop hot tub and yoga studio, where classes are also open to locals. Oddsson hopes to also be able to offer guests art classes run by the Reykjavík Art Academy, which shares the same building.

For anyone unlucky enough to lose their luggage in transit, the hotel also runs a Lost Luggage Program, where guests can borrow clothes.

Photography is by Ari Magg.