London Design Festival 2016: French designer Mathieu Lehanneur has added to his Liquid Marble series for an exhibition at the Carpenters Workshop Gallery (+ slideshow).

The Spring exhibition features pieces that use material to play on the idea of the natural states – solid, liquid and gas.

The designer returned to his Liquid Marble technique to sculpt aluminium into convincing waves that sit at the base of glass tables.

"They fix the moment as a frozen image and play with the constant reflections of light on their polished surface," said the designer. "Liquid creates a certain ambiguity of its materials, in a state of transition at the border of liquid and solid." 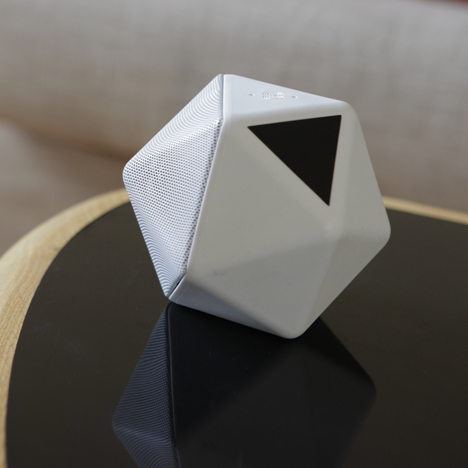 "As a thread of glass and light stitched into the ceiling, this chandelier leaves its object's status to become, as by magic, intimately linked to architecture," he said.

His Smoke lamps were made using hand-blown glass globes, and the Spring lamps, which are also new to the exhibition, are made from a bundle of ribbed glass tubes that appear to be erupting from a marble base. Lehanneur has maintained the natural finish of each material.

As part of London Design Festival, Lehanneur is also showing a Liquid Marble piece at the Victoria and Albert museum, made from a single piece of polished black marble sculpted to resemble a narrow pool.

The Spring exhibition is being held at the Carpenters Workshop Gallery, and is open from 8 to 30 September.