London Design Biennale 2016: design duo Barber and Osgerby have installed a giant weathervane at London's Somerset House to help the city's residents find their way "at a time of national turbulence" (+ slideshow).

Created for the first London Design Biennale, Forecast is a wind-responsive installation located in the courtyard of the historic Neoclassical building where the event it taking place.

It is inspired by traditional weather instruments and contains three elements – a weathervane, an anemometer that measures wind speed, and a turbine that harnesses the power from gusts of air.

When the wind blows, Forecast becomes a kinetic installation with gently revolving parts. Barber and Osgerby hope that it provides the British public with a place to reflect on "where we are now and where we are going as a nation".

"There's a saying 'it's an ill wind that blows nobody any good', which means every change brings some good with it," studio co-founder Jay Osgerby told Dezeen.

"At a time of national turbulence – with Brexit, with our change of government, the change of leadership in parties – we felt it was apt to produce a piece that constantly shows a different route." 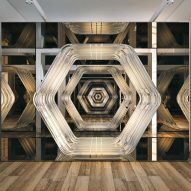 Barber and Osgerby designed the installation to meet the Biennale's theme of Utopia by Design, which celebrates the 500th anniversary of Thomas More's Utopia.

Starting with this classic text – in which Utopia is an island only reachable by sea – the designers reflected on what utopia meant in Britain's past, and what it might mean in the future. Wind became a unifying theme.

"Over the history of the UK, we've been able to reach other parts of the world for trade, commerce, all through wind-powered shipping," said the studio's other co-founder, Edward Barber.

"We also looked at the future of what could be a utopian vision for Britain," he continued. "Britain happens to be one of the world leaders in energy generation from wind power, and we have some of the largest offshore wind farms in the world."

The installation also works on a "tongue-in-cheek level", according to Osgerby. "It's well known that the British talk about weather more than anything else.

The duo constructed Forecast from a combination of aluminium, steel and composite materials. Many of its elements needed to move with the wind, so they were made to be as lightweight as possible.

The structure has been coated in a navy blue finish so that it looks like a single element. It was curated by London's V&A Museum and built by Litestructures with engineering support by Arup.

The installation is the UK's entry into the London Design Biennale, which runs from 7 to 27 September 2016 and features works by architects and designers from 37 countries.

Forecast is included in Dezeen's top ten picks of the Biennale. Other installations at the event include Australia's recycled ocean plastic table and Turkey's pneumatic messaging system.