A tower block has been named the worst new building in the UK, after being described as "an open invitation to commit suicide".

The Lincoln Plaza housing tower in east London by BUJ Architects has been awarded the Carbuncle Cup 2016 by architecture website BD.

Featuring geometric cladding, projecting glass balconies and a so-called sky lounge, the residential complex was intended by developer Galliard as a striking new landmark to stand alongside the towers of Canary Wharf.

But architect and critic Ike Ijeh, who was one of the competition judges, has called the building a "putrid pugilistic horror show that should never have been built".

"In its bilious cladding, chaotic form, adhesive balconies and frenzied facades, it exhibits the absolute worst in shambolic architectural design and cheap visual gimmickry," he said in a BD editorial.

"Essentially, this building is the architectural embodiment of sea sickness, waves of nausea frozen in sheaths of glass and coloured aluminium that, when stared at for too long, summon queasiness, discomfort and if you’re really unlucky, a reappearance of lunch as inevitably as puddles after a rainstorm." 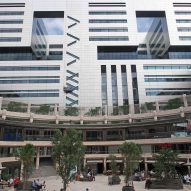 The project saw off competition from five other structures, including the Make-designed Broadgate redevelopment, the engineering faculty building for Sheffield University and an extension to Poole Methodist Church.

This shortlist was selected from public nominations by a judging panel that also included BD editor Thomas Lane, architect and BD columnist Ben Flatman, and Julian Robinson, director of estates for the London School of Economics and commissioner of the Stirling Prize-shortlisted Saw Swee Hock Student Centre by O'Donnell & Tuomey.

Lincoln Plaza was described as "an open invitation to commit suicide" by one nominator.

The Carbuncle Cup has become one of Europe's most controversial architecture prizes thanks to its focus on naming and shaming the architects behind "bad" buildings rather than awarding "good" ones.

It is intended as a counterbalance to the Stirling Prize, which is awarded by the Royal Institute of British Architects each year to recognise an outstanding new building.

"This Carbuncle win is, as it always is, a forthright call to arms against bad architecture and bad planning," added Ijeh.

"And if it takes an irreverent contest between a handful of woeful buildings to bring these matters to light and encourage mainstream public debate, then the Carbuncle Cup has done more for the cause of good design and liveable cities than Lincoln Plaza and its gruesome ilk ever will."

Last year's Carbuncle Cup was won by Rafael Viñoly's Walkie Talkie skyscraper in London, which was described as "a gratuitous glass gargoyle graffitied onto the skyline of London".

Other past winners have included "prison-like" student housing in London and Grimshaw's glass and steel case for the historic Cutty Sark tea clipper.