The Shamsian Collection is based on Omani architecture and crafts. It features a cabinet named Nizwa and the tables Dhow, Masirah and Paua.

"Cultural referencing is at the heart of my design philosophy," said Gray. "Currently I'm particularly drawn to the graphic nature of Islamic art and craft".

"Through my travels and research I'm inspired to create original, contemporary pieces that resonate with global, as well as local, audiences, and that have an elegant and timeless appeal."

Each piece showcases patterns made using the traditional technique of marquetry, used in Islamic craft as far back as the 16th century.

It involves inlaying pieces of wood, solid brass, shells or other materials into a base.

The long Nizwa cabinet – named after a fort in Oman – is the centrepiece of the collection. The cabinet is made from maple veneer sourced from Italy, and is coloured turquoise by hand using stain shading.

The brass detailing across the doors is taken from the intricate architectural patterning of the fort.

The Stud table is an update of a previous model, which now features brass detailing on its side

"The robust building has powerfully stood for centuries as a symbol of military strength, but through its hidden and intricate details, it also reveals Omani architectural ingenuity," said the designer. 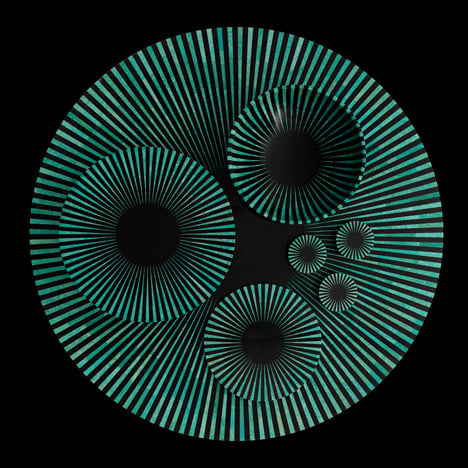 "The repeating pattern on the Nizwa pieces reflect the rounded architectural composition of the fort's castellation."

For the Dhow table, Gray looked to the traditional Dhow sailing boats of Oman, which were driven by large triangular sails sewn together in strips.

The shapes produced by the sails as they catch the wind informed the curving linear patterning – made from solid brass overlay – across the tabletop.

The Paua table follows on from Gray's Brogue Collection, which featured decorative patterns on the side of the tabletops.

Unlike the Brogue pieces, Paua is decorated with the inner-shell coating of pearl-producing molluscs.

Gray is often inspired by Islamic architecture and patterns. In 2014, she, along with artist Mitchell Abdul Karim Crites, set up The Ruby Tree to support the artisans who handcrafted the furniture and tableware designs in their debut range, which included two collections.

Earlier this year, she launched a collection of tables with marble tops wrapped in bands of brass.

The Shamsian collection will launch at designjunction during the London Design Festival, which takes place from 17 to 25 September 2016.

Other events taking place across the capital for the event include a giant curving "wooden smile" installation, and an exhibition of aluminium slabs sculpted to look like pools of water.