Diller Scofidio + Renfro (DS+R) have produced a strange, striking, and sophisticated new building for the Columbia Medical Center. Architectural insiders – a minuscule group relative to the general public – may be quick to point out the series of DS+R's signature moves seeming piled high to the sky in the project, but that would be a disservice to how the building actually works, for whom, and in what context.

Photographs, even the best examples, can only tell part of the story. You have to move through the building, look out from it, and understand its complex, layered program, to appreciate how those familiar forms work in new ways.

The larger medical center complex, which consists of teaching hospital, a dental school, psychiatric facilities, and other medical and educational buildings, is not much of a campus, rather it is a string of buildings in a largely residential area of the Washington Heights section of Upper Manhattan. 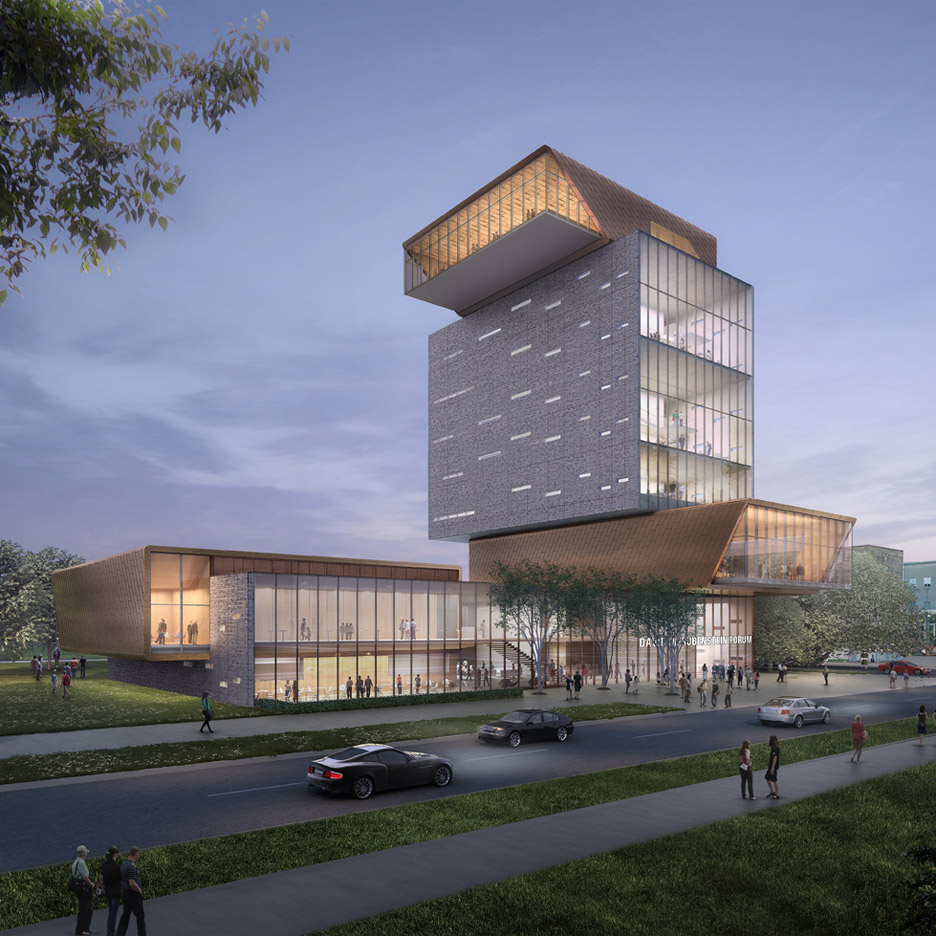 Located at 171st Street and Haven Avenue, the Roy and Diana Vagelos Education Center is wedged between two nondescript modern residential towers for doctors. The new building has a sliver of a view of the Hudson River between the two existing buildings. Previously, the towers sat on top of a parking garage with an elevated plaza between them.

Working with landscape architects SCAPE, DS+R moved the garage entrance to the south and transformed the windswept plaza into a landscaped hill with terraces, creating gathering places for students and faculty, a not insignificant addition for the Medical Center community. Cars (mostly luxury) still zip out of the garage entrance, some quite quickly, making crossing the sidewalk something of a dodge.

The 14-storey teaching building rises out of this constructed landscape like a knobby finger or an abstracted totem pole. Studio co-founder Liz Diller refers to the southern face of the building as the "study cascade", a series of linked circulation, lounge, and meeting spaces, both indoor and outdoor, that run the entire height of the building.

This is the most recognisably DS+R piece of the building – think of the unbuilt Eyebeam Museum of Art and Technology's warped walls and ceilings, the iconic Slow House, the wrap-up decking on the Institute of Contemporary Art, the peel away facade elements of the Lincoln Center Renovation – but that is not necessarily a bad thing.

The north side of the building is comparatively conventional, primarily housing classrooms, labs, and mock operating and emergency rooms. Tricked out with cameras for remote learning and screens with teaching apps, the spaces offer the latest teaching technology, along with glimpses of the city and the river.

Medical education is a notoriously high-pressure and high-stress undertaking, which is where the idea of the "study cascade" becomes important. Exiting the classrooms, labs, surgical theatres and simulation rooms, students and faculty are guided to mix together by the complex architecture of stairs, ramps, bleachers, elevators, many of which provide places to sit, meet, linger, pause, and look out on the dramatic views on three sides.

The interiors are warmed with woods and red and orange walls and carpets. Exterior terraces a decked with planks of artificial timber made from compressed cornhusks. Neck-height glass partitions surround the exterior terraces, providing a discreet obstacle to those contemplating ending not only their studies, but their lives. 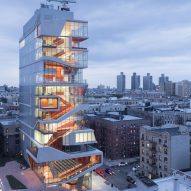 For students being trained in hard sciences, who are routinely forced to confront bodily realities with clinical detachment, the architecture could provide a sense of relief and release. Throughout its work DS+R has displayed a somewhat chilly interest in voyeurism, surveillance, and a technological approach to the body, but its new building for Columbia reveals a more humane side.

It is a place where the somewhat creepy aspects of camera-laden classrooms are balanced by the collegial aspects of coffee study groups, informal venting sessions, and places to relax, and possibly even grab a needed mini-nap. Doctors to be are still people, after all.

Ambitious architecture tends to be commissioned for museums and performing arts centres, not science and professional education buildings. Like their work at the Julliard School at Lincoln Center, which helped reveal the cloistered world of a music conservatory to the city, DS+R's humanist agenda at Columbia may have its largest impact in changing expectations of what future medical professionals expect from their work environments.

Immersing future doctors in an architectural environment that prizes natural light, views of the landscape, and spaces for community and repose could, ultimately, benefit not only other doctors but also the patients they will serve.

The plasticity of DS+R's building also represents something an advancement in the contemporary architectural language of New York. A number of concrete-framed towers are breaking down the old wedding cake or stacked box formula for form-making in the city, previously driven by unimaginative responses to the 1916 zoning resolution, which called for setbacks to bring light and air down to street-level.

These include, among others, BIG's VIA 57 West pyramid/sailboat apartment tower on the far West Side of Manhattan, and Herzog & de Meuron's delightful jumble of block-like volumes for their ultra luxury condo project in trendy Tribeca.

While these two projects serve high-end residents and present only their exteriors to the public, DS+R's education building suggests architectural innovation can still be put to the public good, even in New York.

Alan G Brake is a design journalist, editor, and critic. Formerly US editor for Dezeen, he has also been executive editor of The Architect's Newspaper and has written for titles including Metropolis, Architectural Record and the New York Times.