A giant illuminated disk hung above a set of circular steps to form the set for designer Anya Hindmarch's collection during this season's London Fashion Week (+ slideshow).

The show, which took place on Sunday morning at The Royal Horticultural Halls near Victoria Station, unfolded across an architectural stage that appeared to be inspired by Ancient Greek amphitheatres.

It structure began as a complete circle of rings that stepped down to a low point in the centre, before a section was slid back to reveal a tunnel.

Models emerged from the gap between the steps, moving into different formations to show off the collection of muted neoprene coats and colourful leather bags.

Above them, a huge circular lighting installation glowed in different hues that changed intermittently. The LEDs were diffused by fabric stretched across the bottom of the white ring. 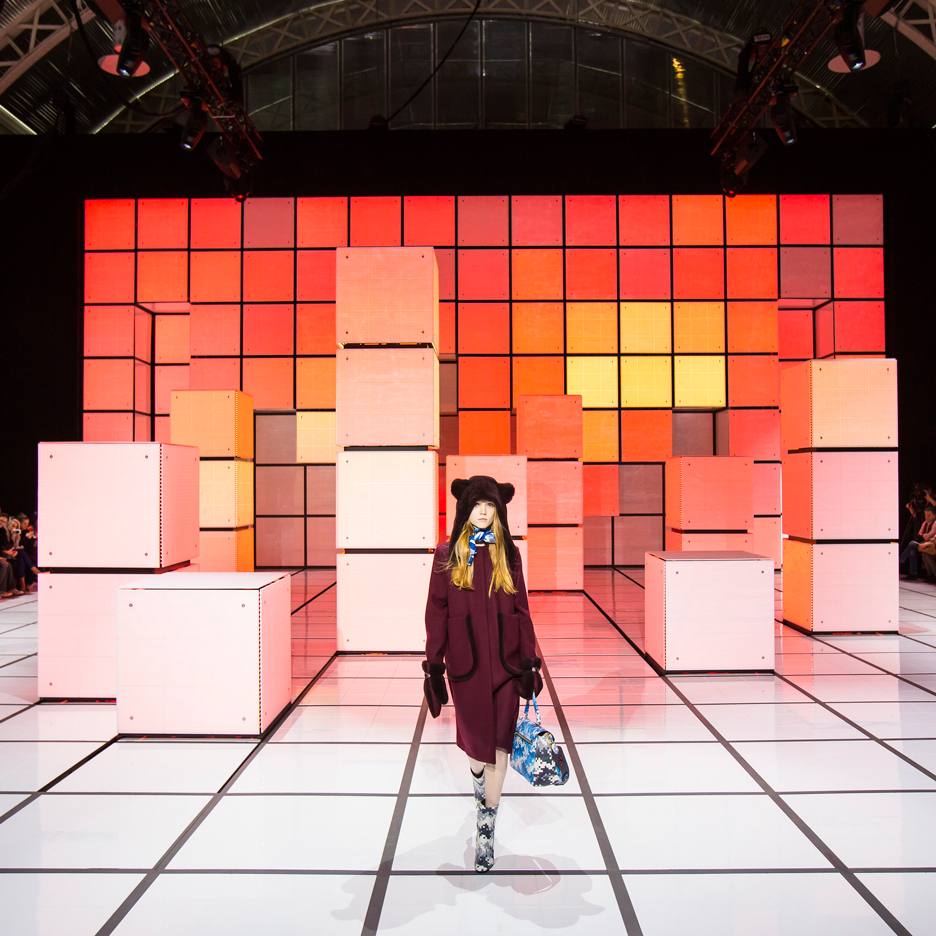 This suspended element and the concentric rings that formed the stepped staging echoed the circle motifs used across Hindmarch's apparel.

"This season I've been preoccupied by the relationship between geometry and art," said the London-based designer. "These two visual mediums are both articulated through pattern, form and colour – things that have always fascinated me."

Fastenings and straps on the leather bags were created using interlocking swatches with rounded shapes. Similar details acted as cuffs, pocket trims and broaches for the outerwear.

"Starting with the 'simple' circle – perhaps the most intriguing geometric shape – I've mixed naive craft techniques and cutting edge technology to create complex shapes," Hindmarch added. "I like to think of this as the leatherwork equivalent of a mathematical equation."

Hindmarch also used colourful lighting effects for her fashion show earlier this year, which was based on 8-bit graphics and Rubik's cubes.

This season's London Fashion Week is taking place from 16 to 20 September 2016. Also for Spring Summer 2017, Gareth Pugh presented a collection based on costumes he created for a sun-themed opera.