Four micro homes are mounted on the roof of a second-world-war bunker in this proposal by Froscen Architects for the Dutch city Leiden (+ slideshow).

Each of the proposed houses has a floor plan of just 38 square metres, but contains a double bedroom, lounge, kitchen and bathroom.

"The whole has the appearance of a kind of 'urban rock' right in the middle of the city, a perfect location to build on," said George. 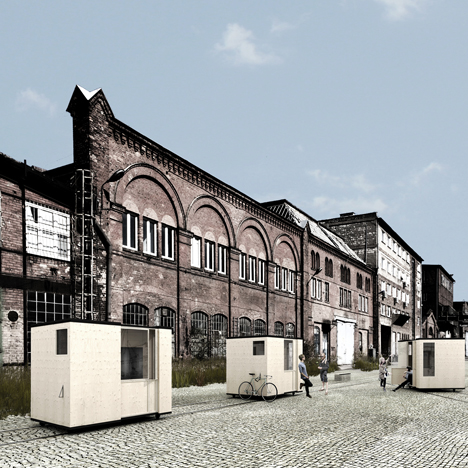 "Our aim with the design is two-fold. On the one hand we want to promote the concept of tiny houses in the Netherlands by building an example for all people to see," he added.

"On the other hand we want to give the bunker a more prominent role in the history of the city by crowning it with a more modern architecture. This way the story behind the bunker can become part of the collective consciousness of the citizens of Leiden."

The bunker dates back to the second world war, when it formed part a massive coastal defence structure named the Atlantic Wall, which was built under Hitler's orders in the mid 1940s.

The late French architect Claude Parent based the Brutalist concrete Church of St Bernadette on the design of some of the bunkers forming this defence line.

The structure is hidden behind a false facade of brick and overgrown ivy, but George plans to peel away these layers of disguise to make the bunker a focal point of the city.

The houses feature mono-pitched roofs that angle down towards the centrepoint of the complex and balconies overlooking the street.

A living space and kitchen with room for a dining table are set on the ground level of each residence. The upper floors are designed to be large enough to house a sitting area, a double bed as well as a bathroom and built-in wardrobe.

The houses are designed to be built almost entirely from wood – as a contrast to the chunky concrete walls of the bunker, but also to make the construction light.

The facades are shown covered in batons of light-coloured timber.

Thick walls measuring 30 centimetres are designed to provide a high level of insulation and lower heating costs. But during the summer the houses would be naturally cooled by the flow of cold air through the bunker below.

"Everything [is] optimally designed as compact as possible, using every square metre," said George.

"The tiny houses FOON are extremely sustainable in nature. They have a small ecological footprint, both in the amount of material used and in the energy needs."

Froscen Architects is hoping to build the project and is currently in discussion with the city council.