London Design Festival 2016: this furniture collection from designer Alessandro Zambelli features a puzzle of metal pieces that have been oxidised to different degrees (+ slideshow).

Commissioned by London gallery Matter of Stuff for its Curated by MOS exhibition, the Marque collection is inlaid with metal shapes that have subtle colour variation.

Zambelli achieved this variation by oxidising a single type of metal to different levels on each piece of furniture.

The "dry bar" is made from brass in warm brown hues, while its console is made from cooler iron and the side table has a green-patinated copper top.

Zambelli's aimed to take a fresh approach to traditional marquetry with his collection. 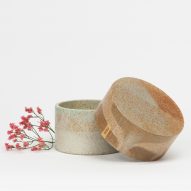 Ariane Prin's Rust collection changes over time as it oxidises

"The use of inlaid metal is an homage to the Paris of the 20s and to the art-deco designs of Emile Ruhlmann and Jean Dunand, who were the main advocates of this style," said Zambelli, who has previously worked with panels of geometric wood.

After oxidation, the sheets of metal were cut into geometric shapes and assembled like a jigsaw alongside pieces cut from complementary sheets.

The pieces are inlaid into wood to form the cabinet doors, tabletop and other details.

Zambelli developed the Marque furniture with the factory of specialty Italian metal manufacturer Toscari. Matter of Stuff paired Zambelli with the manufacturer for the Curated by MOS exhibition, which aimed to marry traditional Italian craftsmanship with contemporary design ideas.

Three up-and-coming designers developed pieces in marble and three in metal for the exhibition.

Also on display was a striped marble furniture collection by Polish designer Olga Bielawska, who created the illusion of tables draped in striped silk.

The exhibition coincided with the London Design Festival, where oxidised metal made a recurring appearance. The material featured in copper-dusted homeware by Ariane Prin and patinated copper wallpaper by Piet Hein Eek.