Open for one month, Everlane's space on Wooster Street in SoHo is modelled on the glass-roofed conservatory at the Barbican, which is filled with tropical plants that contrast with the concrete architecture of the existing building.

"Taking inspiration from London's Barbican, we worked with honest materials to encapsulate the ethos of Everlane: transparency," said Storey.

"Looking at the juxtaposition of the city versus nature, we explored the interior landscape created through architecture."

Apart from the plants, the store has a minimal palette – much more muted than the brash presentation space that Storey created for Nike in the city two years ago.

At the entrance, the main display area is hidden behind plywood partitions arranged around the building's iron columns.

Visitors check in at a curved white desk, leaving their shoes with an attendant, before proceeding into the concept store through an arched opening. 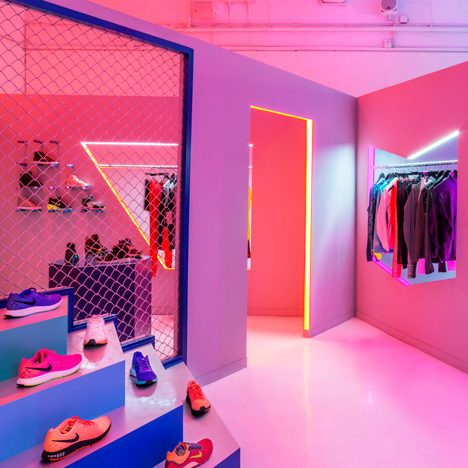 Arches recur across the space, in the forms of a white-framed pergola covered in greenery and a floor mirror for customers trying on footwear.

Wooden plinths and shelves display shoes in all available sizes, and create seats for shoppers. There is also a refreshments bar and a cosmetics counter.

Plants sprout from the tops of the stands, and can also be found in clusters around the edges of the floor area.

"Combining the inherent idea of play and tranquility, we have built an immersive and multi-disciplinary environment for the Everlane customer to experience," Storey said.

The Shoe Park is open until 23 October 2016. Earlier this year, Everlane also opened its first physical showroom at its San Francisco headquarters, in a pastel-coloured space designed by Brook&Lyn.

Despite the growing popularity of online shopping, physical pop-ups remain useful for retailers to showcase their products to a different audience.

Similarly, Camper created a temporary store designed by Diébédo Francis Kéré at the Vitra Campus last year, while COS enlisted Snarkitecture for a pop-up store in Los Angeles.