The contrasting halves of these perfume bottles can be repurposed separately, or in combinations as vases and incense holders.

Developed by Mexico City-based Esrawe Studio and Cadena & Asociados, the receptacle is made from two hemispheres – one in wood and the other in glass.

Rather than forming a ball, the pair touch at their curved edges so the bottle is able to stand flat on its lower transparent portion.

The shape was influenced by the sculptures of Romanian artist Constantin Brâncuși, according to the designers.

"The formal development of the bottle is inspired by the abstract precolonial sculpture, myths, magic, sacred geometry, the wisdom of nature, seeds, cells and spores," they said.

The bottles were created for botanical aromatics company Xinú to hold its different fragrances, which are distinguishable by simple labels and slight colour variations in the liquids.

A key intention of the design was for the containers to be reused once the perfume runs out. Each half can hold thin items, like plant stems or incense sticks, in their narrow openings. 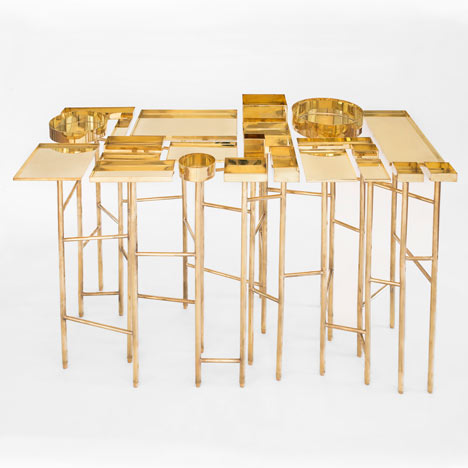 The modular forms can also be stacked up in various combinations for decorative purposes.

"The creative process had in itself an awareness of recycling and permanence, under the clear understanding that a simple and convincing expression means a highly complex execution, which needs high quality materials," said the designers.

Designers including Nendo and Tokujin Yoshioka are among those that have also created perfume bottles for brands, while Philippe Starck recently went one further and designed the bottles for his own line of fragrances.

The Xinú bottle launches today as part of Design Week Mexico, taking place in the country's capital from 5 to 9 October 2016.

Esrawe Studio was founded by Mexican designer Héctor Esrawe. His past projects include a table with multiple compartments for the obsessively organised, and a set of brass and wood lamps that are controlled by sliding and pivoting elements.

Previous projects by Cadena & Asociados founder Ignacio Cadena include a restaurant in Guadalajara lined with thousands of animal bones.